Bush condemns 'unjustified and brutal' invasion of Iraq, instead of Ukraine, in speech gaffe 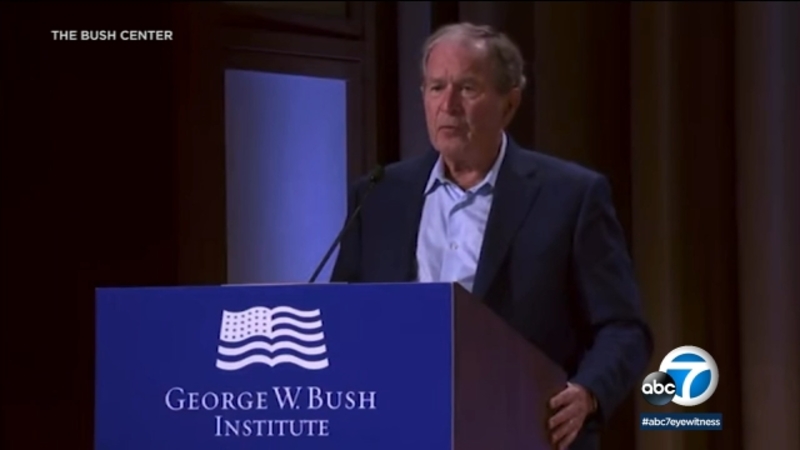 Former President George W. Bush had a tongue-tied moment at a speech on Wednesday and millions on social media took notice.

When condemning Russia's attack on Ukraine, Bush mistakenly referred to the decision to launch an "unjustified and brutal invasion of Iraq" before quickly correcting himself to say "Ukraine," in what was a bungled criticism of Russian President Vladimir Putin.

"The result is an absence of checks and balances in Russia, and the decision of one man to launch a wholly unjustified and brutal invasion of Iraq," said Bush, before catching himself and shaking his head. "I mean -- of Ukraine."

Realizing his mistake, Bush then appeared to say under his breath, "Correct."

Bush made the comment in a speech at his presidential center at Southern Methodist University in Dallas on Wednesday during an event examining the future of American elections. After a pause, Bush blamed the mistake on his age and the audience laughed.

Liev Schreiber hosted the 'Unite for Ukraine,' fundraiser in Washinton D.C. to help get money to the people and organizations who need it in Ukraine.

But on Twitter, the reaction to Bush's inadvertent reference to the most polarizing decision of his administration was mixed, as users revived criticism of his decision to invade and sarcastically riffed on his history of such slip-ups.

Another user cracked that "Freud really stepped out of his grave to personally slap the 'Iraq' out of Bush's mouth didn't he."

The mixup was widely seen. Since video of Bush's speech was clipped and tweeted by Dallas News reporter Michael Williams on Wednesday, it has been viewed more than 17 million times.

In his Wednesday remarks, Bush also described Ukrainian President Volodymyr Zelenskyy as a "cool little guy," deeming him "the (Winston) Churchill of the 21st century."

As president, Bush oversaw the U.S.-led invasion of Iraq in 2003 -- as part of the post-9/11 conflicts in the Middle East -- under the pretext that the country was hiding weapons of mass destruction, or WMDs. Iraq's dictator, Saddam Hussein, was deposed but no weapons were found, and the war officially lasted for nearly a decade.

While the Bush administration argued the fighting was necessary for national security even without the WMDs, it became increasingly unpopular at home. Thousands of U.S. service members and tens of thousands of civilians died.

Bush wrote in his post-White House memoir that he had a "sickening feeling" when he learned there were no WMDs in Iraq after their supposed existence was used as justification for the invasion. He told ABC News' "World News Tonight" when leaving office in 2008 that the "biggest regret" of his presidency was what he called the "intelligence failure in Iraq."

When pressed in that interview, Bush declined to "speculate" on whether he would still have gone to war if he knew Iraq didn't have WMDs. "That is a do-over that I can't do," he said.

Nonetheless, he wrote in his memoir, "I strongly believe that removing Saddam from power was the right decision."