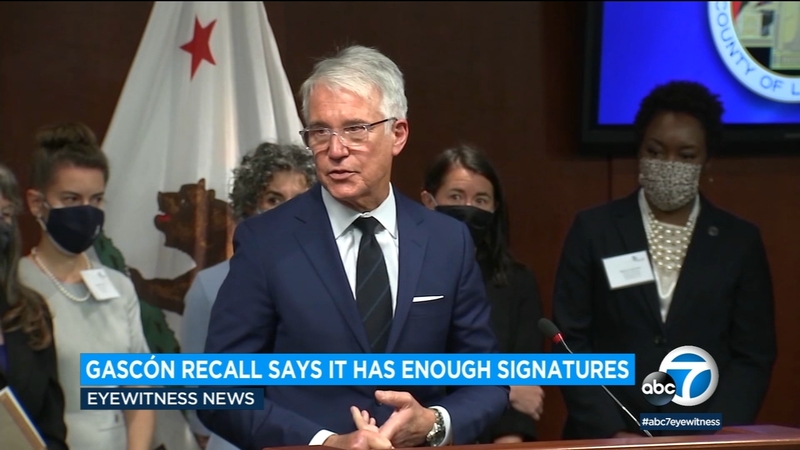 LOS ANGELES (KABC) -- A group seeking to recall Los Angeles County District Attorney George Gascón said on Wednesday that it has collected enough signatures to qualify for the ballot.

In a statement, the Recall DA George Gascón campaign announced it has has surpassed 566,857 signatures collected as of Tuesday, "which equates to 10% of registered voters" in the county "and is the required threshold to officially initiate a recall."

"This is the most signatures ever collected in Los Angeles County for any petition," the group claimed.

Organizers said their focus has now turned to collecting as many additional signatures as possible to ensure there is a necessary "cushion" to offset those that are invalidated by the county registrar of voters. The campaign's stated goal is to submit 650,000 - 700,000 total signatures or more.

"We are officially within striking distance of initiating a recall against George Gascón, but the urgency for signature collection in these final days will be greater than ever," the news release said.

The official deadline for signature submission to the county registrar is July 6.

A Venice mother was walking her eight-month-old in a stroller when a rental car driven by a 16-year-old toppled them over, then tried to flee in August of 2021.

Gascón eked out a narrow victory over the law enforcement-backed District Attorney Jackie Lacey in November 2020.

Since then, he has pursued an agendas centered on reducing incarceration through measures such as a virtual prohibition on trying juveniles as adults, the rejection of "enhancements" (for such factors as gang involvement or use of a gun) that extend sentence lengths and a policy of not prosecuting "quality of life" misdemeanors associated with homelessness, such as trespassing and public urination.

That agenda quickly faced fierce resistance from other elements in the criminal justice system committed to traditional approaches, including the unions representing police. Law enforcement interests are backing the recall against Gascón.

A new effort to oust the DA from office began in December, just months after a similar recall campaign fell short.

Organizers of the prior recall attempt said the effort was hampered by COVID-19 pandemic health mandates, along with a "premature start'' and vowed to re-launch their bid to recall the county's top prosecutor.

Despite the failure of the original effort, organizers said they remained committed to recalling Gascón, who has come under fire from critics for a progressive agenda.

Gascón has repeatedly defended his policies, saying his stances were well-known during his campaign and his election signified public support of his agenda.

The CNN Wire contribute to this report.