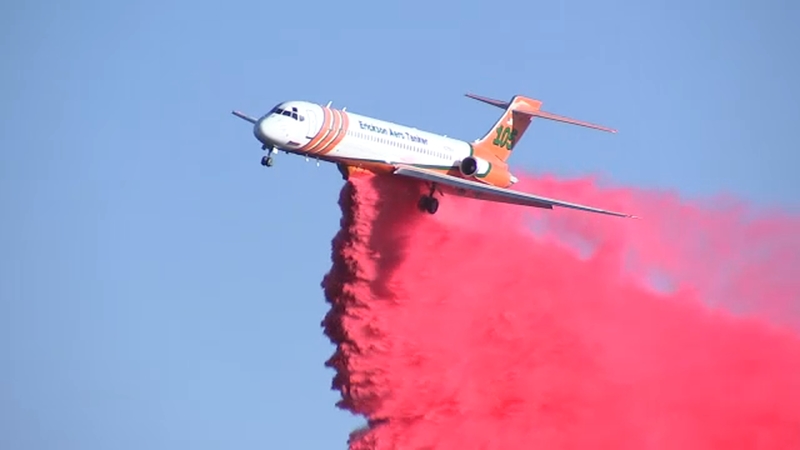 BRENTWOOD, LOS ANGELES (KABC) -- The Getty Fire was sparked when high winds carried a tree branch from outside of a brush clearance zone into a city power line, officials said Tuesday.

The eucalyptus branch hit the line, creating an electrical arc that sent sparks to the ground, investigators concluded. The power lines themselves continued to deliver electricity, but the sparks set out a fire that spread quickly amid the dangerous Santa Ana winds and dry brush.

The power lines were located near the 1800 block of North Sepulveda Boulevard to the west of the 405 Freeway and the fire began around 1:30 a.m. Monday.

Garcetti and other officials said the city had done brush clearance in the area over the summer beyond what was legally required. The tree where the branch came from was about 25 feet away from the power line and 20 feet up the hill.

Dashcam video shows the moment the Getty Fire sparked up along the 405 Freeway early Monday morning.

In the meantime, the firefight continued Tuesday. While the flames were mostly under control, firefighters remained on guard to prevent the blaze from rekindling ahead of a major Santa Ana wind event expected Tuesday night.

Firefighters worked overnight to spray homes in the Brentwood area and other neighborhoods to stamp out any existing embers. Many homes in Brentwood were seen red-tagged, charred and unrecognizable.
Fire officials said it's critical to get ahead of the coming Santa Ana wind event, which is expected to arrive in the Southland Tuesday night. Forecasters say this round of wind may be the strongest of the season so far.

At a Tuesday afternoon press conference, Mayor Eric Garcetti said the fire had increased slightly in size to 656 acres and was at 15% containment.

LAFD Chief Ralph Terrazas said crews are on alert ahead of the wind event.

"Our goal today will be to increase containment as much as possible. That is our primary objective," he said. "Embers are known to travel for miles...We are very concerned about tonight's wind event."

Time-lapse video from a camera at LAX shows the first flames of the Getty Fire rising over the hills and spreading for hours to burn more than 600 acres.

The Getty Fire erupted at 1:30 a.m. Monday along the 405 Freeway in the Sepulveda Pass, prompting the mandatory evacuation of thousands of residential and commercial structures. The blaze has destroyed 12 homes and damaged five.

"We know we're going to have a major wind event tonight at about 11 o'clock that's going to last until Thursday. We're doing everything we can to wrap our arms around this fire to be able to prevent a potential of those strong gusty Santa Ana winds, pushing this fire, rekindling a lot of the fire and blowing embers a mile to two miles down range," said Assistant Chief Jaime Moore with Los Angeles Fire.

Garcetti announced he was signing an emergency declaration to bring more resources to help battle the blaze. During a press conference, Garcetti said the fire was not caused by an encampment or by someone without housing.