2 firefighters rescued by colleagues, hospitalized after being trapped in burning apartment building in Glendale 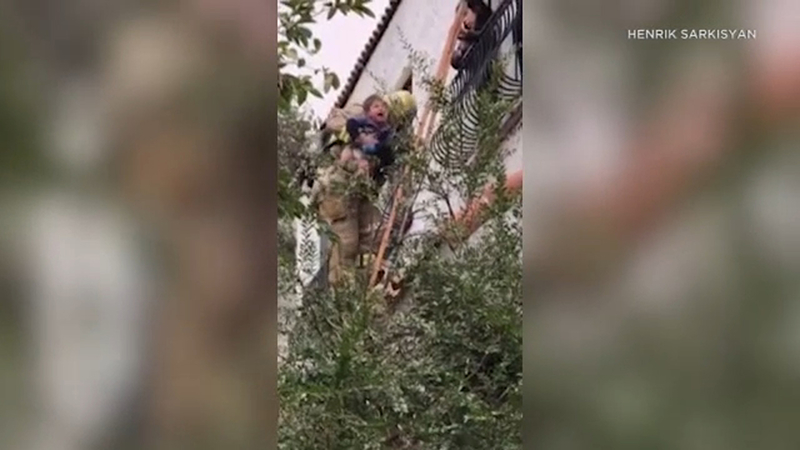 GLENDALE, Calif. (KABC) -- Two firefighters were transported to a hospital Thursday afternoon after being trapped in a burning apartment building in Glendale and rescued by fellow firefighters, authorities said.

The blaze erupted about 3 p.m. at a multi-story structure in the 100 block of Carr Drive.

Firefighters attacked the flames from the roof and on the ground while launching a search operation for people who were possibly inside. Six people, including at least one child, were medically evaluated. Three of them were transported to a hospital with minor smoke inhalation.

A witness captured video of a woman and her child trying to jump out of the window on the top floor as firefighters were arriving. Crews were able to get a ladder up to their apartment and were able to rescue them.

Video from AIR7 HD later showed firefighters pulling two of their colleagues from the building and attending to them on the grass outside. Chief Silvio Lanzas said they fell from the first floor of the building into the basement.

Both appeared to be conscious and sitting up on their own as they were placed in ambulances and taken to a medical center. They suffered minor injuries as smoke inhalation but were expected to fully recover, Lanzas said.

Maria Gutierrez's father is the apartment manager. She says he ran to try to help his tenants.

"The right side of his body did catch on fire, so he got a little singed," she said. "But I understand they're first-degree burns so he should be fine."

Lanzas added the building, which was built before 1933, posed a challenge for fire crews.

"It's old, the construction features are very different than what our buildings are built to today. It poses a real challenge for us from a firefighting standpoint," he said.