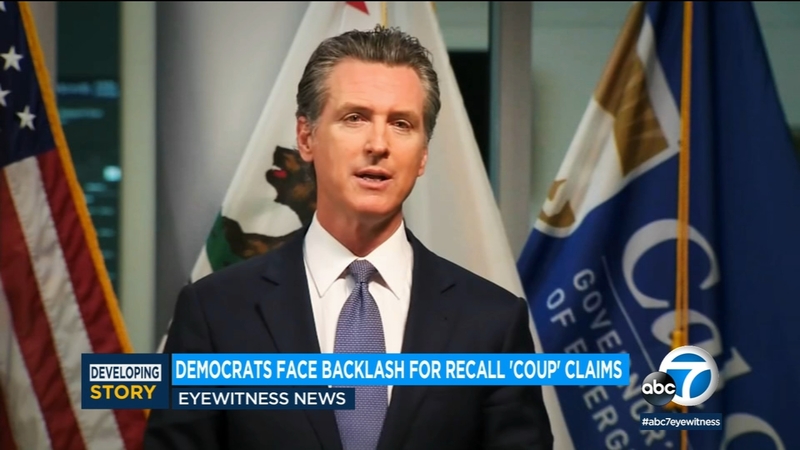 LOS ANGELES (KABC) -- California Republicans on Wednesday seized on a bungled Democratic attempt to link the proposed recall of Gov. Gavin Newsom to the insurrection at the U.S. Capitol, depicting it as a dangerous act of desperation by the Democrats and fresh evidence that the governor needs to go.

The criticism came as the Republican Party of Orange County launched a new round of fundraising appeals for the recall, saying Democrats were attempting to enflame political tensions at a time of national strife.

"There is nothing more democratic than an election," the party said in a statement, defending the proposed recall that could take place later this year.

A campaign is gaining momentum to recall Gov. Gavin Newsom based off of how he has handled the pandemic.

Newsom originally received some praise for his aggressive approach with the nation's first stay-at-home order last spring. But there is growing criticism over extensions to the order, and his admission last month that he dined at an opulent restaurant in Napa Valley while telling state residents to spurn social gatherings and stay home. The public shaming continues for his ill-advised dinner at the French Laundry, an establishment that features a white truffle and caviar dinner for $1,200 per person.

The governor has since apologized, but some are growing tired of the rules.

Organizers need about 1.8 million signatures by mid-March to qualify the recall for the ballot, said Anne Hyde Dunsmore, a former finance chair of the California Republican Party who is an honorary chair of Rescue California, which is gathering signatures for the recall effort.