Last month, 77-year-old Andrew Jelmert was hit and killed by a suspected drunk driver just as he was about to finish a ride.
KABC 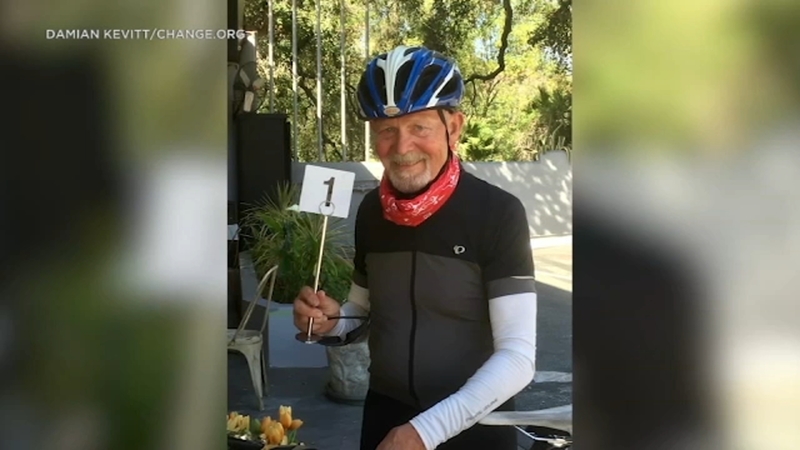 LOS ANGELES (KABC) -- Hundreds of cyclists, runners, athletes and supporters are hoping to send a strong message about safety at Griffith Park two weeks after one of their own was killed in a hit-and-run crash.

About 1,600 people are expected to participate in this year's "Finish The Ride and Finish The Run" event Sunday, which is aimed at promoting safety on roads across the country.

Last month, 77-year-old Andrew Jelmert was hit and killed by a suspected drunk driver just as he was about to finish a 67-mile bicycle training ride.

The man who struck Jelmert got out of his car and ran off. He was caught and arrested a short time later, and has since been charged with murder and hit-and-run resulting in death.

"When the horrible tragedy with Andrew happened, it really hit me hard on many different fronts," said Damian Kevitt, the executive director and founder of Streets Are For Everyone.

Kevitt nearly lost his life nine years ago not far from where Jelmert was killed when a car hit his bike and dragged him onto the 5 Freeway.

"I threw as much resources as I could from my organization into not only how to support his partner of 28 years, but also ... what can we do to actually prevent this from ever happening again," he said.

Griffith Park is one of the largest urban parks in the United States and allows drivers to travel through it.

Since Jelmert's death, organizers said public officials are seeing more people in support of phasing out drivers being able to use Griffith Park as a cut-through to the 5 Freeway.

The 50-mile bike ride on Sunday will be led by André Goeritz, Jelmert's partner of 28 years.