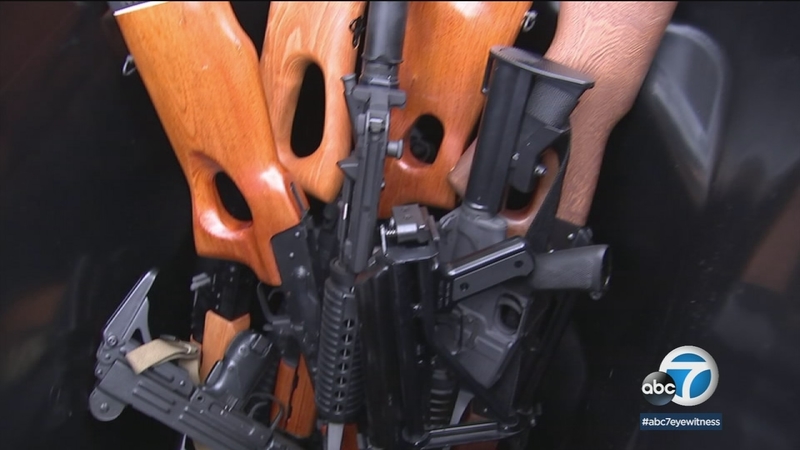 LOS ANGELES (KABC) -- In a big push to get guns off the streets in Los Angeles, a city program ran events with the LAPD in Mission Hills and Elysian Park on Saturday to buy back weapons with no questions asked.

The program, sponsored by Mayor Eric Garcetti's Office of Gang Reduction and Youth Development, allows anyone to surrender firearms anonymously in exchange for gift cards. The cards are valued at $100 for handguns, shotguns and rifles and $200 for firearms classified as assault weapons in California.

According to the mayor's office, the gift cards were distributed while supplies lasted. Firearms brought to the buyback locations must be unloaded and stored in a locked container or trunk.

"Fewer guns means fewer chances for crimes and tragic accidents that devastate our families and communities," Garcetti said in a statement. "We're going to keep bringing down gun violence in Los Angeles, and a big part of that is working with responsible owners to get dangerous, unwanted firearms off the street and out of homes - so they can never fall into the hands of criminals or children."

The Gun BuyBack is happening right now. You still have time to turn in your firearms at two locations till 1pm. Listen to Lieutenant Embrich as he explains how the program works and what happens to the guns once they are turned in. Click the link in the video for more information pic.twitter.com/BjxIc6X4ec

Sherie Carroll turned in her guns that she inherited from her father.

"I don't want them in my house," she said. "Especially with the amount of gun violence that we're experiencing in the world today, I don't want someone to have even the option of breaking into my house and taking guns and using them to do bad things to other people."

Carroll added that recent school shootings and the shooting at a high school in Palmdale this week helped her make her decision.

LAPD Chief Charlie Beck credited last year's program as one of the key reasons that gun violence has fallen in the city.

"I know there are a number of studies that show just gun buybacks don't affect the number of victims shot, but we don't do just gun buybacks," Beck said. "This is part of the greater strategy. It's also not just a crime issue. Most gun violence is suicide."

Saturday's events were scheduled for 8 a.m. and 1 p.m. at the Frank Hotchkin Training Center at 1700 Stadium Way in Elysian Park, and the Facey Medical Group at 11165 Sepulveda Blvd. in Mission Hills.