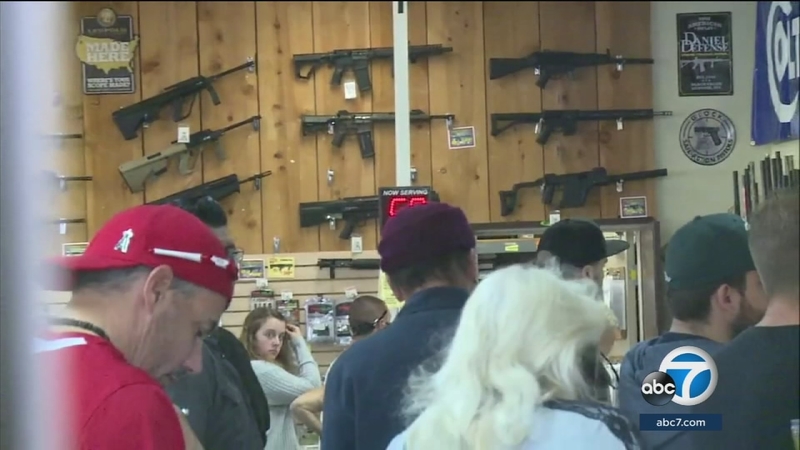 SAN BERNARDINO, Calif. (KABC) -- The fallout from the terror strike at the Inland Regional Center is measurable. Long lines of shoppers have been forming outside San Bernardino gun stores.

"I plan on getting a couple here," said Monica Squires, who now sleeps with a cross bow above her bed.

Other gun owners are going one step further. They are seeking a CCW, a concealed weapons permit that authorizes a gun owner to carry that weapon in public for personal protection.

The San Bernardino County Sheriff's Department processes the CCW applications, and since the massacre, phones have been ringing off the hook.

A CCW official tells Eyewitness News that an estimated 1,100 people have filled out extensive forms and are now awaiting the next step in the screening process. The vetting aims to determine whether the applicant is law-abiding and as it states on the application, is "of good moral character."

"They send your information to the Department of Justice, fingerprints, every place you have lived, references," said one man getting a renewal permit who did not want to be identified.

There are many background factors that can disqualify an applicant. Among them are a recent bankruptcy, an incident of domestic violence or a DUI.

The applicant must go to safety classes and to a range to certify the gun owner knows how to properly handle their weapon. It is a four-month process that includes a personal interview at the sheriff's department.

The California Department of Justice authorizes each county to offer permits within state law. San Bernardino County ranks as No. 2 in the state for issuing the permits, just behind Kern County.

Many people say they want to be prepared in case they are confronted by an active shooter. One gun owner who carries a permit urges caution. Hobbyists are ill-prepared to engage in combat.

"We've got to let our men in blue -- they've sworn to uphold the law -- sometimes it's best to let the professionals do it, and it is better to be a good witness," said the permit holder, who did not want to be identified.