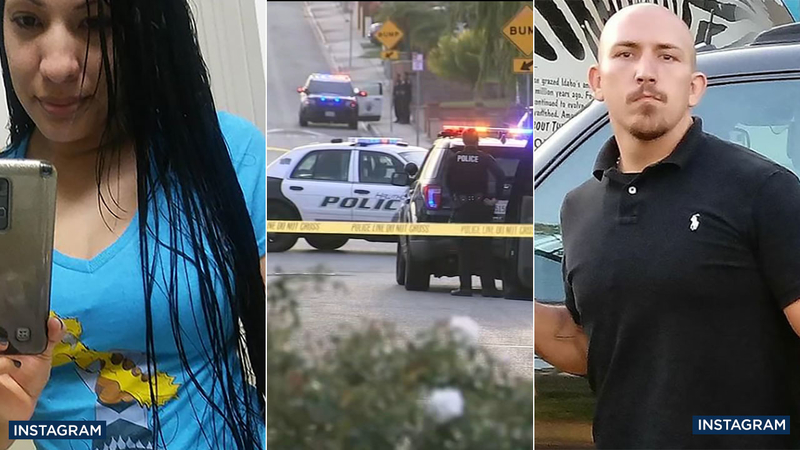 HAWTHORNE, Calif. (KABC) -- Officials have identified the suspect accused of fatally shooting the mother of his child in front of the Hawthorne police department Sunday.

Jacob Munn, 30, was arrested after allegedly shooting and killing the mother of his child, 28-year-old Brenda Renteria, as they were meeting in front of the police department, officials said.

Police say the mother and father met in front of the station at 12501 Hawthorne Blvd. for a custody exchange of their 17-month-old son around 6 p.m.

Munn left the child inside the station for the exchange. Police say when Renteria arrived, Munn ran from the parking lot, jumped over some hedges and pulled out a shotgun, then shot her right in front of the station.

As he fled the scene, an officer came out of the station and fired at him, but he escaped.

The suspect's black pickup truck was found less than a block away.

A man shot and killed the mother of his child as they were meeting for a custody exchange in front of the Hawthorne police department Sunday, officials said.

Police sealed off the area and searched for more than three hours before finding the suspect in the 4400 block of 134th Street, only blocks from where he abandoned the vehicle. He was then arrested without further incident.

The front wall of the station remains riddled with holes that police say were left by the suspect's shotgun.

#update #breaking @HawthornePD have arrested wanted murder suspect.
He was found in a residential area in the 4400 block of 134th street..not far from where he abandoned his truck after fleeing the scene. #HAWTHORNE https://t.co/oHuuqOq6BJ

Female killed in front of the HPD station. Suspect vehicle located abandoned in the area of 133/Hawthorne. We are actively searching for the suspect. This is an officer involved shooting incident.

Police say the couple's child was waiting inside the station when the shooting occurred and was not injured.

Munn is being held on $2 million bail.

Lt. Jim Royer with the Hawthorne police said it is common for people to meet at the station to perform custody exchanges.

"Every weekend we have quite a few people that come to the station that are here to perform custodies," Royer said. "The exchanges are made here because police facilities are safe havens for people to come and report whatever incidents that they may have."