Even cities that provide most of their own electricity independently could be asked to initiate rolling blackouts if the power grid is strained.
KABC
By Rob McMillan and Leanne Suter 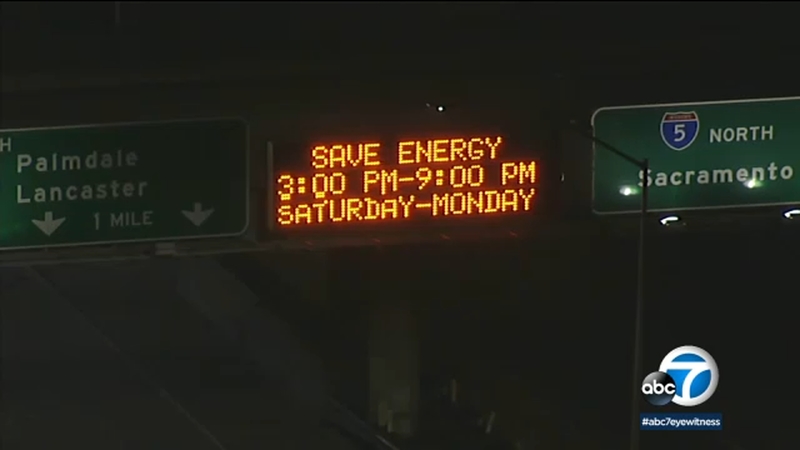 Temperatures across the Southland are expected to push well above the triple digit mark for most locations over the next three days. Consequently, California's Independent System Operator has declared a Flex Alert starting Saturday at 3 p.m.

Cal-ISO said in a statement that this heat wave will put exceptionally heavy strain on the power grid. Because high temperatures will be affecting several states across the western U.S., it will be more difficult to import energy to serve demand.

Even cities that provide most of their own electricity independently could be asked to initiate rolling blackouts if the power grid is strained.

"We partner with Cal-ISO," said Riverside Public Utilities spokesperson Jerry Buydos, who expects the city of Riverside to peak at 605 MW over the weekend.

Rolling blackouts were ordered across the state three weeks ago on Friday, and again the following day.

"If Cal-ISO needs us to shut down power for the sake of the state of California, that's when you'll see a rolling blackout in Riverside," said Buydos.

Public officials are urging residents to conserve energy during peak periods, specifically between 3 p.m. and 9 p.m. on Saturday, Sunday and Monday to avoid the possibility of rolling blackouts.

"It all comes down to the people of California," said Buydos. "If they all participate in the Flex Alert and turn the AC up to 78 degrees or higher, don't run the major appliances, and don't charge your electric vehicles (during that time), we can get through this."

Also, because overnight temperatures are expected to be about ten degrees higher than normal, infrastructure will not cool down as easily.

"It's the same concept as your car," said Buydos. "If your car overheats, your engine might fail. The same with the electrical equipment; as it's taxed under extreme heat, it works harder and harder, and therefore can fail."

This weekend's heat wave could force another round of blackouts.