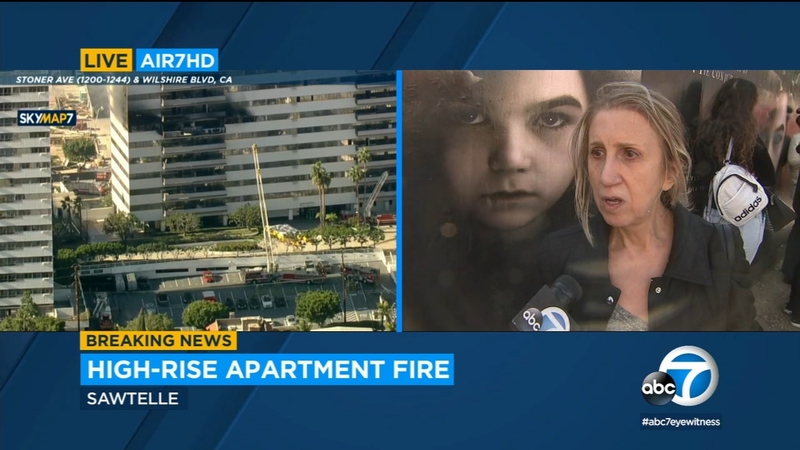 Woman recounts discovering her Westside building was on fire

WEST LOS ANGELES (KABC) -- A woman in the Westside high-rise where a fire erupted Wednesday is recounting the moments of terror as she discovered her building was in flames.

The fire broke out shortly after 8:30 a.m. in the 11700 block of West Wilshire Boulevard in the Sawtelle neighborhood, according to the Los Angeles Fire Department. The flames were on the building's seventh floor - the sixth floor occupied by residents.

This same building was the site of another fire in October 2013, on a higher floor on the other side of the building. Five residents were injured, including a young girl.

The building - which was built in 1961 - did not have a sprinkler system at the time.

And fire officials said today it still has no sprinkler system.

The woman said during the previous fire, the notification process for residents was very slow.

"I called downstairs and asked them, the last time, what was going on, they said nothing. Because they didn't want everybody to run down the steps."

A dramatic fire erupted on the seventh floor of a high-rise apartment building on the Westside of Los Angeles, prompting a massive response from firefighters on ladder trucks and in helicopters.

This time, she said, it was not a notification from the building that alerted her. Instead, it was residents on the floor above her throwing things off the balcony.

"I just thought it's people throwing things down from the balcony. Then when it became a lot I got up and looked out and I saw there was flames, things are falling, glass, flames on my balcony. Then also I heard people running down the steps. That's when I realized it."

Although she got out unharmed, the experience was traumatic.