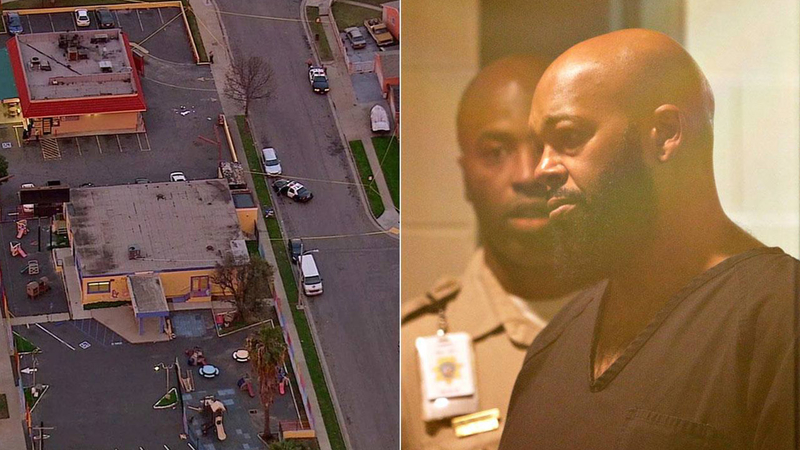 COMPTON, Calif. (KABC) -- Rap music mogul Marion "Suge" Knight is considered a person of interest in a fatal hit-and-run in Compton on Thursday. Knight arrived at the West Hollywood Sheriff's station overnight and is being interviewed by homicide detectives. The hit-and-run is being investigated as a possible homicide, Los Angeles County sheriff's deputies said.

"The people we have talked to have said it looked like it was an intentional act, so we're handling it as a homicide," Lt. John Corina said.

Knight claims he was attacked by two people and tried to escape in a car, which led to the hit-and-run at about 3 p.m. in the 1200 block of West Rosecrans Avenue, his lawyer James Blatt said.

Blatt added that Knight struck a friend named Terry Certer, a man who was later pronounced dead. He said the second pedestrian was actor Cle Shaheed "Bone" Sloan, who was not seriously hurt.

Los Angeles County sheriff's deputies said a red pick-up truck ran over both men behind a business. Both victims were taken to a hospital, where a 55-year-old man was pronounced dead. A 51-year-old man was injured.

Witness Robert Smith said he heard an argument before the deadly incident.

"I turn to look out and I seen Suge Knight turn around and go to his car. He backed his car up and put it in drive and hit Terry Carter. He ran him over twice," Smith said.

Authorities say half an hour before the fatal collision, Knight got into an argument on the set of a promotional shoot for the film, "Straight Outta Compton," a biopic about the rap group NWA.

Investigators were continuing to look into reports of Knight's involvement. They were reviewing evidence, talking to witnesses and looking at video. They said they found Knight's truck in Westwood, which may have been used in the hit-and-run.

"We're not calling him a suspect. We're just following up on what witnesses are telling us. We just want to talk to him," Corina said.

Witness Denise Mazzei shot video of the scene outside the area where the hit-and-run occurred. She works as a security guard for Rite Aid across the street.

Video courtesy of Minaj Anderson. Tap to view if on News app.

Knight is currently out on $500,000 bail in connection with an alleged theft of a paparazzo's camera. He is scheduled for a court hearing on Tuesday.