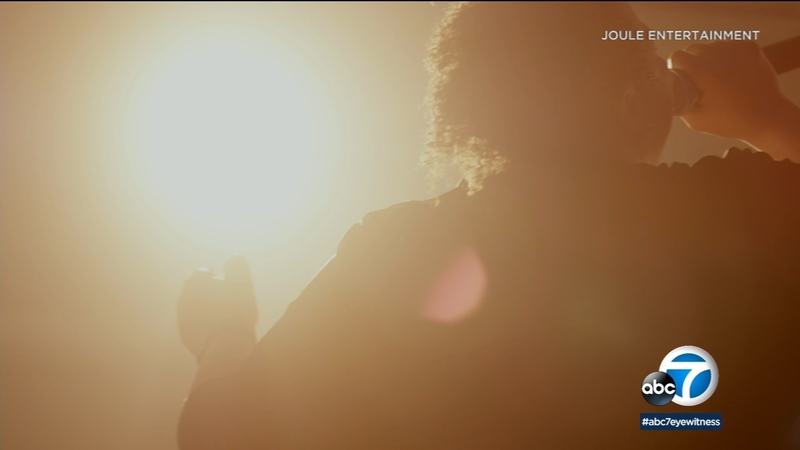 LOS ANGELES (KABC) -- This is a movie that is in limited release but that you should definitely seek out. "Hold On" is from a young filmmaker who met a talented but undiscovered singer. Both were struggling for different reasons. But when they found each other, they connected in a wonderful way, and became friends and business partners.

In "Hold On", singer Micayla De Ette gets to show off her five-octave range. When director Tarek Tohme heard her, he was blown away. At the time, Tohme was dealing with losing his mentor to cancer. De Ette lost her sister to a drug overdose.

"It rocked my life. It rocked my faith. My family is still recovering," said De Ette. "When I met Tarek, I really believe it was divine because I was like, 'I don't care. I don't care if I ever sing again.' And he was like, not on my watch."

Eventually, Tohme wrote a movie he planned to direct, with De Ette on board as to star, help produce and perform her original faith-based music. The director hopes this movie will now open every door imaginable for her.

"You know, I believe she should perform at the grandest stages in front of the grandest audiences and I think there should be no limits to what she can do," said Tohme.

When Tohme needed a place for a concert in the movie, there was no money in the budget. But they went to The Grove in Los Angeles because he once produced a commercial for them in college.

"And they said on the spot, you're filming here and we're going to let you do it for free!" said Tohme.

The duo now has a production company with a music branch and a plan to help others.

"It took Tarek to believe in me and me to believe in him and we're like, wait a minute. We're talented. It's not an ego conversation. It's just we weren't meant to do something there," said De Ette. "And we want to bring people to that place where they believe in themselves."

"We're going to be our own 'yes.' We're going to get this to a point where we can make it successful and then hopefully bring on other people who have similarly been overlooked and not had the chance," said Tohme. "So, it starts with being our own yes and open the doors for other people down the road."
Report a correction or typo
Related topics:
arts & entertainmentmovie
Copyright © 2022 KABC Television, LLC. All rights reserved.
TOP STORIES
Vigil held for 19 children, 2 teachers killed in TX school shooting
Uvalde school shooting: What we know about 19 kids, 2 teachers killed
Onlookers urged police to charge into TX school: 'Go in there!'
After Texas shooting, LAUSD announces updated safety plans
4.3-magnitude earthquake rattles town of Trona, USGS says
Timeline breaks down Uvalde shooter's movements day of massacre
West LA family searching for missing man with autism
Show More
Los Angeles watering restrictions approved by city council
2 Turpin siblings now have large following on TikTok
South LA nonprofit says more work needs to be done in social justice
2 years after the death of George Floyd, what has changed?
Hospitality workers call for moratorium on Anaheim development deals
More TOP STORIES News