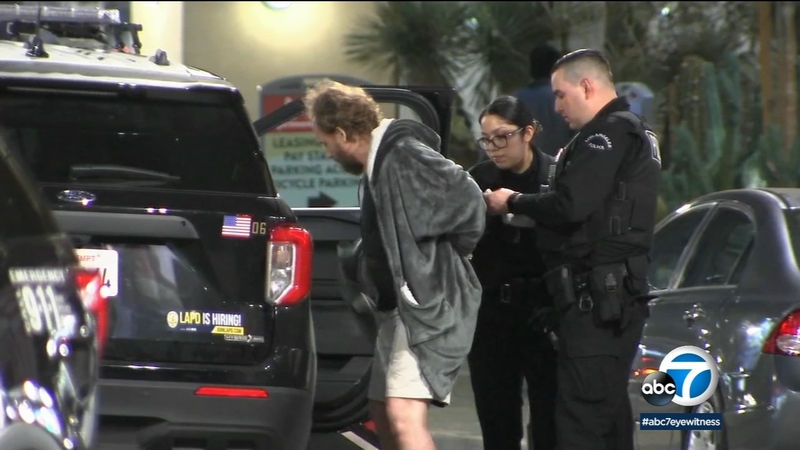 HOLLYWOOD, LOS ANGELES (KABC) -- A 35-year-old man was arrested Sunday night and is being held on $500,000 bail for allegedly firing shots near where a large crowd had gathered on Hollywood Boulevard to honor singer Vicente Fernández.

Joseph Dietrich, 35, was arrested and booked on suspicion of "shooting into an inhabited dwelling," according to the Los Angeles Police Department.

He was being held on $500,000 bail, the Los Angeles County Sheriff's Department reported.

The shots were fired around 6:25 p.m. from an apartment building in the 6200 block of Hollywood Boulevard, according to police and witnesses.

Dozens of people had gathered across the street on the Hollywood Walk of Fame to honor Fernández, the Mexican singing legend who died earlier Sunday.

Mexican singer Vicente Fernández, who had been hospitalized for several months due to a recent fall, died Sunday morning.

No one was struck by bullets, but a glass door on the street near the gathering was damaged.

Witnesses told Eyewitness News they saw a person's arm out the window of the building firing a handgun into the air.

Police quickly responded to the area and a team of officers entered an apartment building across the street from the Walk of Fame. They took Dietrich into custody.

The LAPD Hollywood Division released photos of a handgun and a box of ammunition that were found in his apartment and taken into custody as evidence.

The suspect did not provide a motive for the alleged shooting, police say.

At approximately 6:25pm, we received multiple calls of a shooting that occurred in the area of 6201 Hollywood Boulevard.

Officers responded and quickly made entry into the apartment building where the shooter was last seen. The suspect and evidence were taken into custody. pic.twitter.com/l19JS7co1L