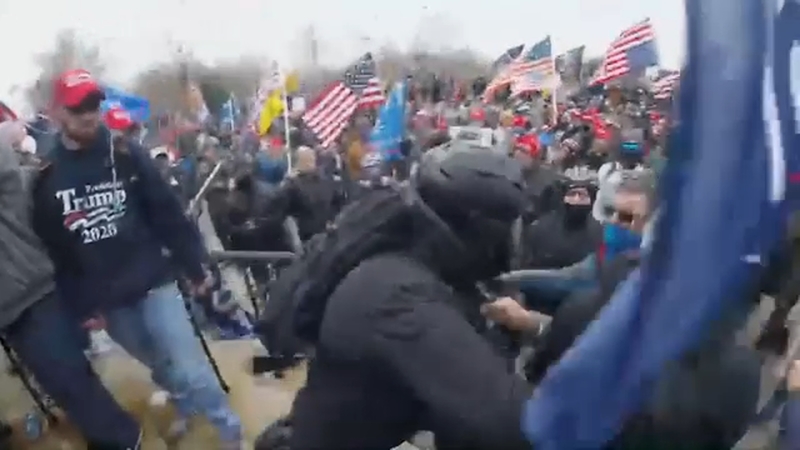 GLENDORA, Calif. (CNS) -- A 20-year-old Glendora man accused of participating in the violent takeover of the U.S. Capitol is expected to make his initial federal court appearance in downtown Los Angeles on Thursday.

Hunter Allen Ehmke was taken into custody about 8:15 p.m. Wednesday at his home by FBI agents and local police officers, according to FBI spokeswoman Laura Eimiller.

Ehmke was charged in the District of Columbia with one federal count each of damaging or destroying government property, obstruction of an official proceeding, and violent entry and disorderly conduct on capitol grounds, according to the U.S. Attorney's Office.

A "statement of facts'' attached to the federal complaint alleges Ehmke was seen standing on a ledge 3 feet off the ground at the U.S. Capitol during the Jan. 6 protest, attempting to break a multiple-pane window over 6 feet in height that leads to an interior office of the building.

The document alleges a Capitol police officer "observed Ehmke with a balled fist, pulling his arm back and twisting his upper body. Ehmke then swung forward striking a pane of the window about shoulder level of Ehmke.''

Ehmke allegedly pointed toward the window and gestured to the crowd "as if to summon others over to his position,'' according to the statement prepared by a special agent with the U.S. Capitol Police.

"This disoriented Ehmke, but he remained standing on the ledge,'' eventually falling to the ground, the officer stated.

"While Ehmke lay face-down on the ground, two other officers with the U.S. Capitol Police pulled Ehmke's arms behind his back and detained him with handcuffs,'' according to the statement, which says an officer obtained Ehmke's California driver's license and positively identified him.

"Due to the growing aggression of the large crowd that far outnumbered the officers and the exigent circumstances at the time, officers made the decision to allow Ehmke to depart under his own power,'' the statement reads. "Officers took photos of Ehmke and the damaged window ... (and) advised Ehmke that his actions were criminal and that they would seek a warrant for his arrest. Ehmke was told to immediately leave the Capitol grounds.''