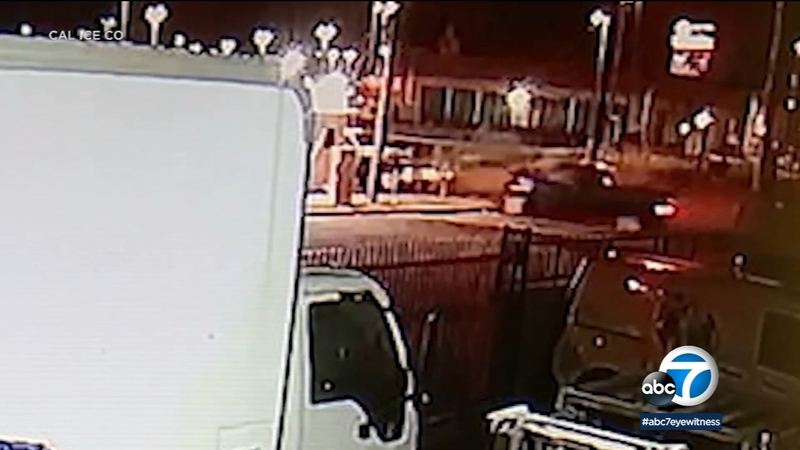 INGLEWOOD, Calif. (KABC) -- Two people were killed and a suspected DUI driver was injured after a dangerous police chase ended in a violent collision in Inglewood late Wednesday night.

The pursuit began shortly after 10:30 p.m. near W. Hillcrest Boulevard and S. Glasgow Avenue after officers spotted a blue Dodge pickup truck speeding on surface streets and running a red light on Century Boulevard near the 405 Freeway, authorities say.

The driver continued onto the 405 Freeway, where the California Highway Patrol say officers attempted to pull him over but he refused to stop. He then exited onto Manchester Avenue and traveled onto several streets before turning onto Glasgow Avenue, where he plowed into a white sedan.

Surveillance video shows the moment the truck ran through a stop sign and rammed into the white car at a two-way stop, forcing the vehicle onto the sidewalk.

"Following this impact, due to the force and high speed, the blue pickup truck also struck another vehicle, which was actually parked along the curb," said Franco Pepi with the CHP.

That's when the suspect fled on foot, and after a short chase, he was taken into custody. The suspect, identified as 42-year-old Gustavo Ruelas, has been booked on a number of felony charges, including DUI of a drug.

"They pronounced one victim deceased at the scene, the other was the driver of the white sedan where he was transported to a local area hospital, and unfortunately, was declared deceased at the hospital," said Franco Pepi with California Highway Patrol.

The victims were only identified as a 27-year-old man, who was the driver of the white sedan, and a 27-year-old female passenger.

The suspect had a puppy with him during the pursuit. The dog was not injured in the incident and was given to Animal Control, the CHP said.