Jacob Blake is no longer shackled to his hospital bed, attorney says

Blake, 29, is hospitalized in Wisconsin, and family members previously said the sight of him tethered to the bed was heartbreaking.
CNNWire 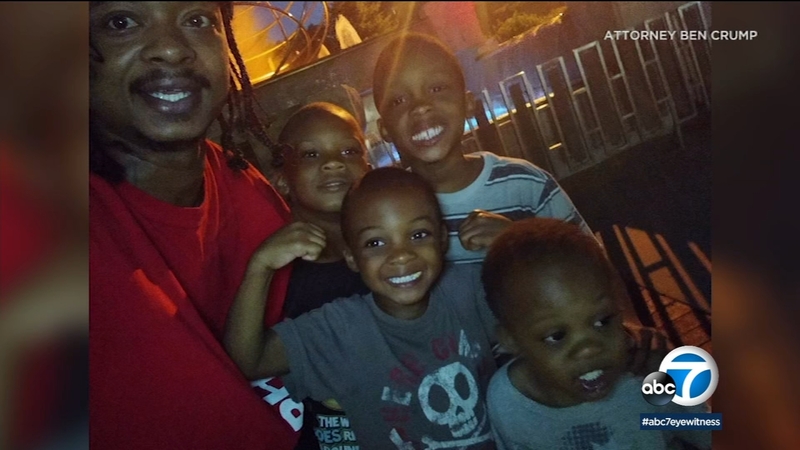 Attorney: Jacob Blake is no longer handcuffed to hospital bed

A heavily medicated Jacob Blake, paralyzed from the waist down and shackled to a hospital bed, clutched his father's hand and wept after regaining consciousness.

"Why did they shoot me so many times?' he asked Jacob Blake Sr.

"Baby they weren't supposed to shoot you at all,'" the father responded, recalling the exchange during an interview with CNN's Alisyn Camerota on "New Day."

Jacob Blake, a Black Wisconsin resident, was shot seven times in the back by a White police officer who tried to detain him this week in Kenosha.

Blake's children, ranging in age from 3 to 8 years, watched the shooting from inside a car their father was stepping into as the officer opened fire. The oldest boy, who was supposed to celebrate a birthday the day his father was shot, also has questions.

"Papa, why did they shoot my daddy in the back?" Jacob Blake Sr. recalled the boy asking him. "Where's daddy?"

Prosecutors on Thursday charged 17-year-old Kyle Rittenhouse in the fatal shooting of two protesters and the wounding of a third in Kenosha, Wisconsin, during a night of unrest following the police shooting of Jacob Blake.

Blake, 29, is hospitalized in Wauwatosa, and family members said the sight of him tethered to the bed was heartbreaking.

"Why do they have that cold steel on my son's ankle?" he asked. "He can't get up, he couldn't get up if he wanted to."

"I would have no personal understanding why that would be necessary," Evers told reporters. "I would hope that we would be able to find a more, a better way to help him ... in recovering. That seems counterintuitive. It seems to be bad medicine."

Kenosha County Sheriff's Department spokesman Sgt. David Wright on Friday explained that Blake was handcuffed to the bed because he "has felony warrants for his arrest from crimes he committed prior to the shooting incident."

Those warrants have been vacated, Cafferty said Friday.

Blake, a Black Wisconsin resident, has been left paralyzed from the waist down after he was shot seven times in the back by a White police officer who tried to detain him this week in Kenosha.

"There is no explanation for it," Blake family attorney Benjamin Crump said before the handcuffs were removed. "It follows the pattern of deliberate indifference and excessive force."

"My son has not been afforded the rights of a human," Jacob Blake Sr. said.

Bystanders captured the shooting on cellphone video and shared the footage widely on social media, turning the lakeside city of Kenosha into the scene of nightly protests against police brutality.

Kenosha Police Officer Rusten Sheskey fired into Blake's back on Sunday while he was trying to enter a vehicle with his three children watching from the backseat.

Local officials have not discussed many details about Blake's shooting but are addressing the nightly protests in Kenosha, especially after two people were killed and a third was injured. A 17-year-old was arrested Wednesday and is facing multiple charges murder charges in the shooting deaths and injuries.

Players had been discussing boycotting games after the shooting of Jacob Blake, a Black man, by police in Kenosha, Wisconsin.

On Wednesday, state investigators offered their first version of Sunday's events -- but with gaping holes in the timeline.

The incident started when a woman called police and said "her boyfriend was present and was not supposed to be on the premises," the Wisconsin Department of Justice Division of Criminal Investigation said.

In a police call, a dispatcher names Blake and says he "isn't supposed to be there" and that he took the complainant's keys and refused to leave. The dispatcher later explains she doesn't have more details because the caller was "uncooperative."

About five minutes after the initial report, a dispatcher received reports of shots fired, police said.

Officers had attempted to arrest Blake and used a Taser in a failed attempt to stop him, the DCI said. He walked around his vehicle, "opened the driver's side door and leaned forward," the agency said.

Sheskey has been with the department for seven years. No other officer fired their weapon.

Blake admitted he had a knife in his possession, and law enforcement agents said they recovered a knife from the driver's side floorboard of his vehicle, the agency said.

State investigators did not indicate why police moved to arrest Blake, whether he brandished or threatened to use the knife, or why Sheskey shot so many times into Blake's back. It does not mention his children in the vehicle or other family members standing just feet away.

Sheskey and another officer have been placed on administrative leave.

Arenas -- who also used his Taser in an unsuccessful attempt to stop Blake, the statement says -- has been with the Kenosha Police Department since February 2019, after previously serving with the US Capitol Police in Washington. Meronek joined the department in January, the statement said.

CNN has reached out to the Kenosha Professional Police Association for comment.

Videos of the incident show a struggle between Blake and police. He then walks around the front of an SUV and tries to enter the driver's side door. An officer is seen pulling Blake's tank top and seven shots are heard.

His attorneys told CNN that Blake did not have a weapon in the car.

"I can't speak directly to what he owned, but what I can say is that his three children were in the car," Patrick Salvi Jr. told CNN. "That was on the forefront of his mind. That is the most important thing to him in his life -- his family and his children."
Report a correction or typo
Related topics:
societywisconsinblack lives matterprotestpolice shootingjacob blakeu.s. & worldkenosha county
TOP STORIES
UPS driver, 24, collapses, dies in SoCal heat
Villanueva's former top aide admits belonging to alleged deputy gang
New Glassell Park restaurant at center of gentrification debate
14 suspects grab and run out with merchandise from Century City mall
4th of July fireworks in Southern California: Where to watch
Teen girl speaks out after surviving shark attack at Florida beach
Fewer young Americans want to serve, due to obesity fewer qualifies
Show More
Experts set expectations about 'vaccine efficacy'
Disneyland replacing Splash Mountain with Tiana's Bayou Adventure
New California laws on bars, ghost guns, schools taking effect
Texas Supreme Court blocks order that resumed abortions
Newsom adds restrictions on ghost guns, marketing firearms to minors
More TOP STORIES News