FACEism: President Reagan's apology for the US internment of Japanese Americans during World War II 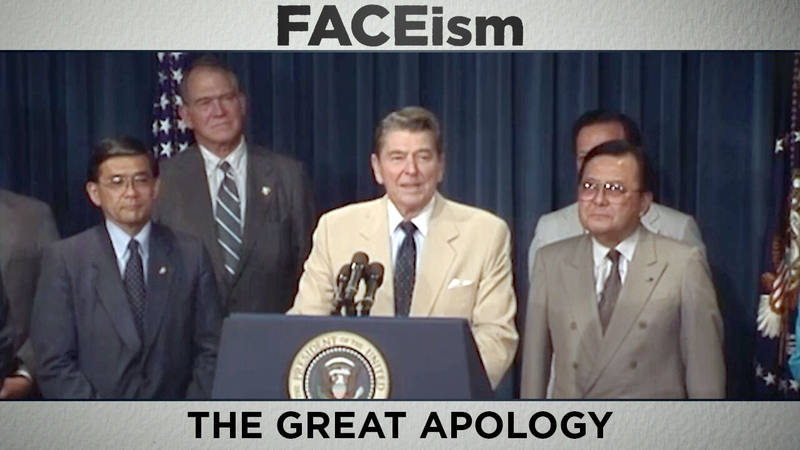 This is not going to be a comfortable conversation, but it is key in understanding how we need to change.

We want to take you back and remind you about a time in recent history when President Ronald Reagan apologized for something that had occurred half a century earlier.

It is one of the few times the U.S. admitted that it was terribly wrong.

"Thank you very much, members of congress, distinguished guests, ladies and gentlemen. We are gathered here today to right a grave wrong," Reagan said.

And with those words, an unprecedented moment in United States History.

It was 1988. Reagan apologized to an entire generation of Japanese Americans for unjustly locking them up during World War II. And, he admitted, it was because of their race -- and nothing more.

"One hundred twenty thousand persons of Japanese ancestry were forcibly removed from their homes and placed into makeshift internment camps," Reagan said. "This action was taken without trial, without jury. It was based solely on race."

In an interview with ABC7, Lorraine Bannai, director of the Korematsu Center for Law and Equality, said: "Unfortunately this country has a history of turning on vulnerable communities.

"When national security issues come up, the government has broad authority to act," she said. "And unfortunately, it acts as it did during World War II, out of concern to secure the nation."
From our very beginning, if you were different you were a threat.

In the early days of settling this country, Indigenous peoples helped us survive. Then, we labeled them as savages. We violated hundreds of treaties, taking their land and their lives.

We needed the hard labor of Chinese immigrants to build the railroad. Yet, we called them "foreign," vilifying them. In 1882, the Chinese Exclusion act was passed.

In each of these cases and many more, we fear what we are unfamiliar with. Then politicians promise to get rid of them to "keep you safe".

"I think that when we see ignorance combined with fear, that's when we see these terrible things happen," Bannai said.