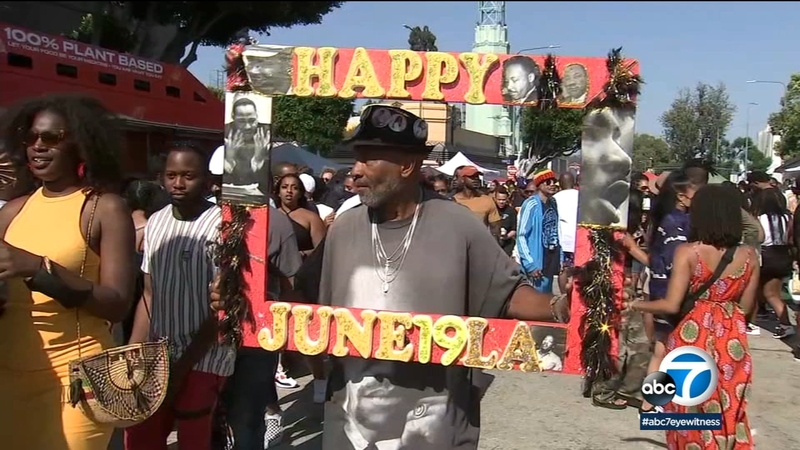 PACOIMA, LOS ANGELES (KABC) -- Communities across Southern California on Saturday gathered to mark Juneteenth, which this week became a federal holiday commemorating the end of slavery in the United States.

In Pacoima, people gathered for a 2.5-mile long walk which mirrored similar events that took place across the country. Opal Lee, who is considered the grandmother of Juneteenth, was the inspiration behind the event.

Back in 2016, Lee at the age of 89 began walking to get congressional backing to make Juneteenth official. Lee began walking in Fort Worth, Texas to Washington, D.C. and Saturday marked her sixth walk.

From "Our America: Black Freedom" in June 2020: Opal Lee is confident that Juneteenth will finally become a national holiday across the country this year.

At the Pacoima event, a cousin of Lee described what the new federal holiday means and its significance.

"Today is that kind of day... to celebrate. That kind of day to look at the strides that we've made, how we've moved forward. This country is not where it used to be but it has a long way to go to where it can be," said Reverend Zedar Broadous, who also organized the event.
EMBED More News Videos

Los Angeles residents held a walk on Saturday to mark the first official celebration of Juneteenth as a national holiday.

Juneteenth commemorates June 19, 1865, when Union soldiers brought the news of freedom to enslaved Black people in Galveston, Texas - two months after the Confederacy had surrendered. That was also about 2 1/2 years after the Emancipation Proclamation freed slaves in the Southern states.

President Joe Biden on Thursday signed into law a bill to make it the 12th federal holiday. It's the first new federal holiday since Martin Luther King Jr. Day was created in 1983.

Several other events were planned throughout Southern California on Saturday.

A Juneteenth march, rally and caravan began at 11 a.m. at La Brea Avenue and Obama Boulevard.

A Juneteenth commemoration was scheduled to be held at Leimert Park Plaza from noon-8 p.m. including art, live music, salon discussions, food and dancing.

Learn more about the history of Juneteenth and what it represents for the descendants of enslaved people and others in the United States.

A Juneteenth Block Party will be held outside the Laugh Factory from noon-5 p.m. with comedians, live music, food, a DJ and special guests.

A Juneteenth Community Rally will be held from 3-6 p.m. at Woodley Park in Van Nuys including games, giveaways, music and speakers.

The Fountain Theatre's Juneteenth Celebration will begin at 7:30 p.m. and feature dancing with D.J. Earry Hall as well as special guests. Food and handcrafted items will be available for purchase.