Review: 'Jungle Cruise' is proof chemistry can be unpredictable 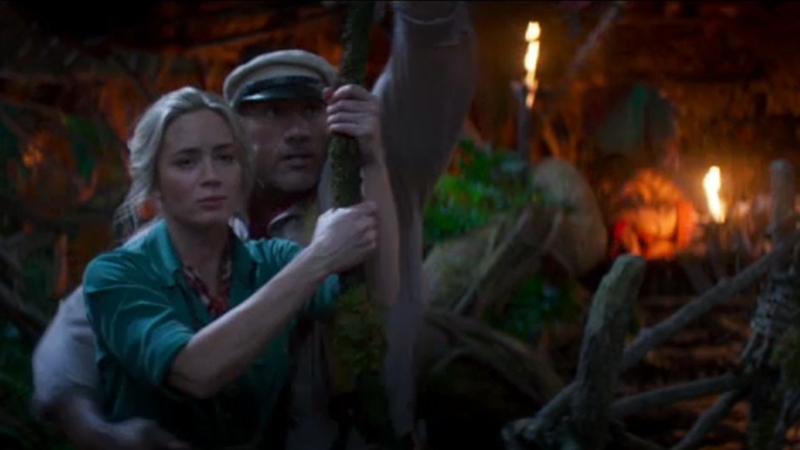 Review: 'Jungle Cruise' is proof chemistry can be unpredictable

NEW YORK -- "Pirates of the Caribbean" proved that it is possible to make a blockbuster movie based on a ride at Disneyland.

The latest attempt is called "Jungle Cruise." Like the earlier franchise, this new movie depends on big stars, but do Dwayne "The Rock" Johnson and Emily Blunt pass the chemistry test? The answer is yes -- in fact, this pair makes the picture worth seeing.

"Jungle Cruise" is proof chemistry can be unpredictable.

The Rock comes from the rough 'n tumble world of pro wrestling. Emily Blunt is from a different world and follows in the rich tradition of British theater. There's no telling why they click, but they do.

"My name is Dr. Lily Houghton," Blunt's character says by way of introduction. "My brother and I are looking for passage up (The Amazon) river."

Johnson's riverboat captain character replies, "what's out there in the jungle is not a fun vacation."

When their movie first screened for test audiences, The Hollywood Reporter noted that early moviegoers wanted even more of the repartee between the two leads.

Their character is looking for the captain to help her find a magical tree, "in the Amazon that possesses unparalleled healing powers," and an arrowhead she stole from a museum is "the key to unlocking it."

Their jungle cruise is, of course, fraught with danger. Sometimes, it seems very real. Other times? not so much...such as when a German submarine chases them as they navigate the Amazon.

The Rock is known for his action movies, and he has plenty of opportunities to show his prowess in this one, but he also has fun as an actor, especially with a series of puns.

Here's just one example: "the rocks you see here in the river are sandstone, but some people just take them for granite."

The dozens of puns do get a tad wearisome, but altogether this film adds up to a lot of fun for families.

The plot gets pretty convoluted and confusing as it always does when five writers get credit for one single movie as is the case here.

Writing is definitely not a team sport, but I was having too much fun watching the two big stars to care. 'Fun' being the word that best describes this one.

The movie is being released to theaters by Disney, owned by the same parent company as this station, and it's also available to subscribers of Disney+ for an extra fee.

And... action! Check out this behind-the-scenes look at the biggest action in Disney's "Jungle Cruise."