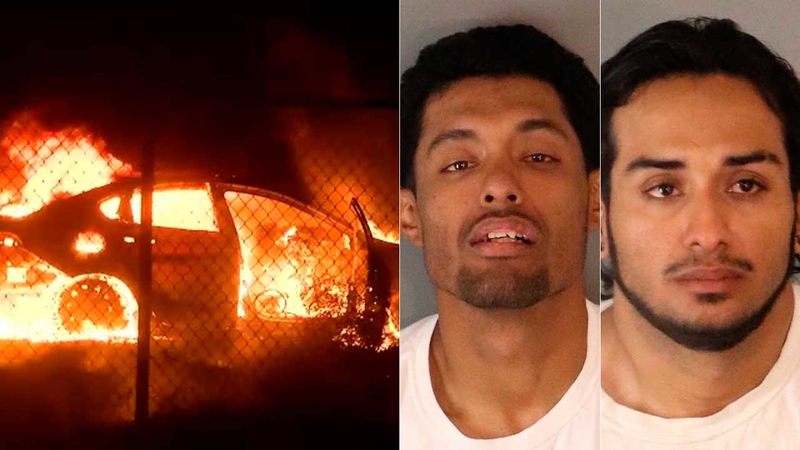 JURUPA VALLEY, Calif. (KABC) -- Several structures were destroyed by a brush fire that was sparked by a crash at the end of a police chase and went on to blacken at least 360 acres in Jurupa Valley Thursday morning, authorities said.

The fire was burning near the intersection of 46th Street and Crestmore Road and began around 12:39 a.m., prompting evacuations and forcing school closures, according to fire officials.

The blaze continued to rage at 5% containment by the evening.

Cal Fire Riverside said at least three residential structures, two outbuildings and one mobile home were destroyed in the fire. Residents attempted to fight back the flames with water hoses.

Robert Ramirez came to help evacuate the horse of a Cal Fire firefighter friend who was battling another blaze up north.

"He called me about 3 in the morning, and he's like, 'Hey Robert, go give me a hand, 'cause I can't be there. So, hitched up the truck and trailer and headed over here," he said.

The first unit on scene reported less than an acre of brush burning, but the wind-driven blaze quickly grew at a rapid rate of spread, according to Cal Fire Riverside. Cal Fire spokesman Jeff LaRusso said the inferno started at the end of a police pursuit, where a suspect crashed near brush that quickly ignited and spread through the Santa Ana River bottom.

News video from the scene showed a sedan fully engulfed in flames.

Bryan Anguiano, 23, who was driving, faces a list of charges, including sparking the fast-moving fire.

Kevin Hidalgo, 28, was the passenger in the vehicle. He was arrested for an outstanding felony warrant.

Anguiano is accused of crashing on 46 Street after fleeing from police in a stolen vehicle. The overheated car quickly ignited the brush, which spread.

"I can't thank the fire department enough, they did a tremendous job and incredible responses," one resident said.

The blaze prompted Indian Hills and Peralta elementary schools to close Thursday, with classes expected to resume Friday, according to the Jurupa Unified School District.

Mexican fan palm trees - which reach heights up to 100 feet - sent embers shooting into the night sky and eventually landing onto the ground, fueling flames.

Fires continued to ravage Southern California and thousands were forced to evacuate after multiple brush fires erupted across the Southland on Thursday.

Shortly after 2 p.m. Thursday, Cal Fire announced that all evacuation orders for the 46 Fire had been lifted.

Southern California is in the midst of increased fire risk as strong winds continue in the region through at least Thursday evening. Winds in the area reached 20 mph.

Another brush fire erupted in Jurupa Valley Wednesday, which burned more than 600 acres and prompted evacuations in the area.