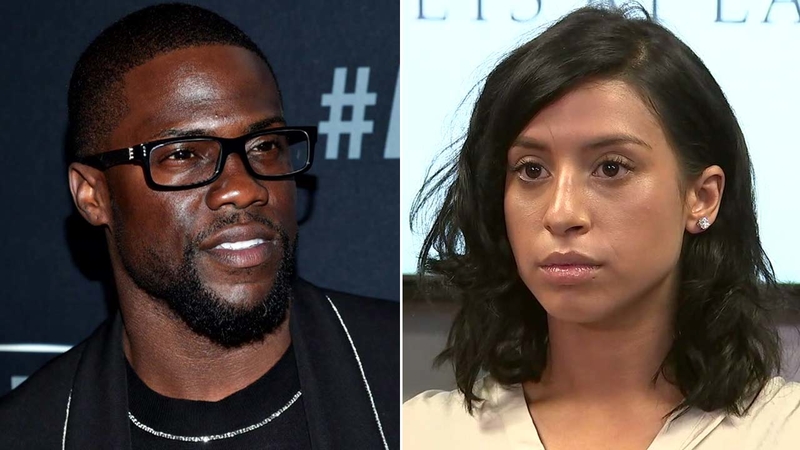 WOODLAND HILLS, LOS ANGELES (KABC) -- The woman at the center of an alleged extortion scandal involving Kevin Hart admitted she and the comedian had an intimate relationship but emphasized she is not an extortionist.

Sabbag said she "was involved with" Hart about a month ago.

"Since then, my pictures and my name have been released and lies written about me," she said. "I'm not an extortionist, I'm not a stripper. I'm a recording artist and an actress, and I have not broken any laws."

Bloom described Sabbag as a victim of multiple felonies. The attorney said someone apparently snuck cameras into Hart's private hotel suite in Las Vegas and recorded bedroom images of the two of them.

Bloom said she does not have any evidence that law enforcement is looking into this matter, and that Sabbag has not been contacted by investigators.

The attorney said she will be reporting the incident immediately to authorities, and she and Sabbag will fully cooperate with law enforcement.

Bloom emphasized that she and Sabbag are not "asking for a cent from Kevin Hart."

This all came to light earlier this week when Hart posted a video online apologizing to his pregnant wife and his kids.

In that video, Hart said he wasn't perfect and recently made poor decisions.

He said there were "no excuses" but added that someone was trying to seek financial gain for his mistakes and that he'd rather confess.

Hart's wife, Eniko, is expecting their first child. He has two children from a previous marriage.

Earlier this summer, a video emerged of Hart looking cozy with a brunette in the back of a car, but he laughed off any suggestions of infidelity in an Instagram post.

Bloom said Sabbag and Hart had an "intimate relationship" about a month ago. When asked if Sabbag knew Hart was married at the time of their encounter, Bloom said, "I'm not going to answer that question."