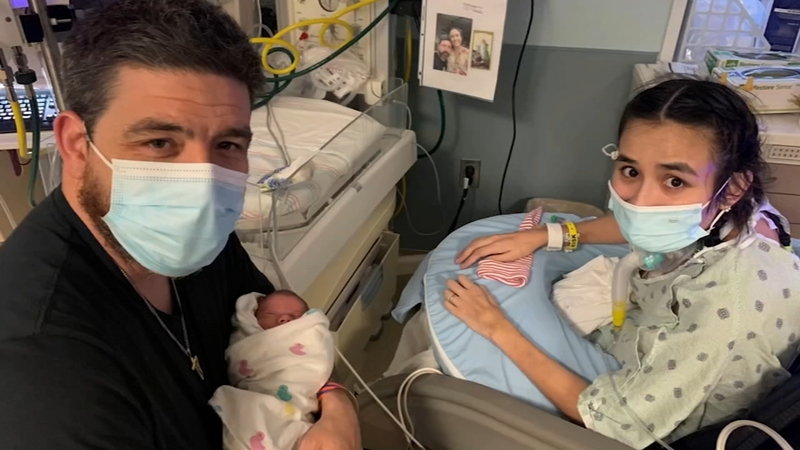 TEXAS -- A Kingwood, Texas woman is expected to make a full recovery after spending 139 days in the hospital battling COVID-19 while she was pregnant.

Diana Crouch was diagnosed with the virus in August of 2021. Her symptoms started out with a headache and her doctor thought she might be dehydrated, but it persisted.

When she went to the emergency room on Aug. 4, she tested positive for the virus. Two days later, she was back in the ER and was told she has COVID pneumonia.

With two children at home and another one on the way, the expecting mother was transferred to Texas Children's Hospital. At just 18 weeks pregnant, she was put on a ventilator and sedated on Aug. 10.

The now mother of four was admitted into the hospital for COVID a day before giving birth to her son. She went more than a month without seeing him. Here's her message to everyone.

Her husband, Chris, said they thought she would be on it for seven to 10 days, but after 17 days she was not doing any better.

Dr. Cameron Dezfulian, who works as the medical director of adult congenital heart inpatient care at Texas Children's Hospital, made the decision to put Diana on ECMO. He said it was pretty much a last resort.

"You pump blood out of a patient's body, run it through an artificial lung, fill it with oxygen take off some of the carbon dioxide, and pump it back into their body," Dezfulian explained.

The doctor's goal was to get Diana's baby to a viable stage of pregnancy. Chris made it clear he wanted to save both his wife and his unborn son.

"It definitely was the hardest thing I've ever had to do, because a decision could be fatal if I don't make the right decision. But I don't have a lot of time to make these decisions," Chris said.

Diana was sedated for weeks and has very little memory of her time in the hospital.

"It's scary," she said. "You don't know you are out that long. I was in the hospital for almost five months. It felt like a year to me."

It was a moment nearly 100 days in the making when Cierra Chubb walked out of the hospital to rehab.

At 25 weeks pregnant, Dezfulian said Diana seemed to be doing a lot better but things quickly took a turn for the worse. Diana suffered from three strokes on the same day and had a heart attack. She was also having seizures.

Her team of doctors was careful about what sort of medication they gave her so the baby would not be affected.

"The next morning, I remember coming in and (Chris) said, 'I know this is going to be OK, God has told me this is going to be OK,'" Dezfulian recalled. "He said, 'We are going to have a heck of a story to tell when this is done.' He was right. It is a heck of a story to tell. I think him saying that and just how sure he was about it made me sure, because really, as the physician, I didn't have any kind of confidence. I knew what was up ahead of us. I knew all the things that could go wrong."

"Dr. Dezfulian, we sat down together and we prayed, because I told him I didn't come here to plan a funeral," Chris said with tears in his eyes. "He prayed with me and said, 'This is all we can do now,' and we were lucky enough and blessed to actually get better from there. It meant a lot for the doctor to share a prayer with you. It means so much. It crossed my mind way too many times that I was going to be raising these kids by myself."

At 31 weeks, with her original due date being Jan. 9, Diana had an emergency cesarean section after her lung collapsed. She said she was introduced to her baby three days after he was born.

Her health took a turn for the better after giving birth and was taken off the ventilator 10 days later.

Since then, Dianas was transferred to Methodist Hospital and evaluated for a possible lung transplant but it was determined she did not need one. The mom was released from the hospital after 139 days on Dec. 23.

Vicky Goodson never got to meet her daughter. Her family hopes her story can help others avoid the same tragedy.

Now that the 28-year-old mom knows all that she went through in the hospital, she considers herself a miracle.

"God hugged me really tight," she said. "It wasn't possible without him. My child is a miracle too. I don't know how he got through it too."

The couple named their baby Cameron, after their doctor.

"When he's working, you can see that he really cares," Chris said. "I said, 'Man if we get through this, we are going to name our child after you' and he was crying by the hospital bed."

"It's never happened before," Dezfulian said about having a child named after him. "When they told me, I was in tears. It's such an honor. I told them I said I don't deserve this. I consider this one of a handful of miracles. (Chris) told me that and he said, 'We are just really grateful and believed that we would get through all of this.'"

Diana is still on oxygen on an as-needed basis. She is going to physical and occupational therapies, but Dezfulian believes she will make a full recovery.

"It's only been a couple of years since the pandemic started, so the long term we don't know because there hasn't been a long term yet but she has made tremendous progress," Dezfulian said.

New data that shows no increased risk of miscarriage in early pregnancy and no safety concerns late in pregnancy with the mRNA vaccine.

Chris is so grateful to have his wife, newborn and their two other children together at home.

"Sometimes, I lay in bed and cry, because I can't believe she went through all that," Chris said. "She gets discouraged at times because she can't do a lot of the things she used to, but I tell her to be in this situation is something I prayed for because it wasn't looking good at all."

Dezfulian said Diana is one of seven expectant mothers in the country and he believes one of about 12 in the world to sustain her pregnancy while on Extra Corporeal Membrane Oxygenation (ECMO). He called her case "exceptional."

"As a physician, we do have a lot of tools and a lot of knowledge, but there are a lot more things that we don't know than we do," he said. "There was no textbook, no paper, no playbook to say what the right answer was."

At the time she contracted COVID, neither Diana nor Chris were vaccinated. They have been since.

"The reason, obviously, for her was because she didn't think it would be good to get a vaccine while she was pregnant," Chris said. "The doctors said all of this could have been avoided if she was vaccinated. We'll never know at this point."

"Pregnancy seems to make the risk higher and many of them are not vaccinating because they aren't going to take a new mRNA vaccine," Dezfulian said. "I understand the rationality behind that, but the risk from COVID is high."