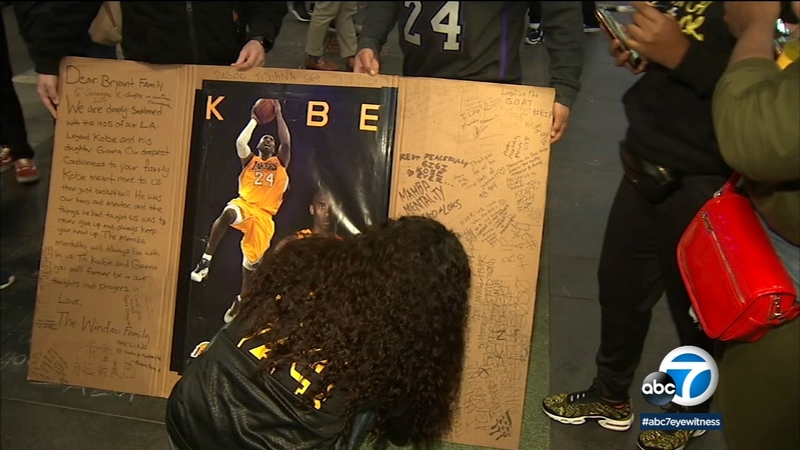 LOS ANGELES, Calif. (KABC) -- The love continued to pour in Monday at Staples Center for basketball superstar Kobe Bryant and his 13-year-old daughter who were killed in a helicopter crash in Calabasas.

Meanwhile, a game between the L.A. Clippers and Los Angeles Lakers, which had been scheduled for Tuesday, Jan. 28, was postponed. The game will be rescheduled at a later date, according to statement from the National Basketball Association.

"The decision was made out of respect for the Lakers organization, which is deeply grieving the tragic loss of Lakers legend Kobe Bryant, his daughter Gianna and seven other people in a helicopter crash," the organization said.

The world remained in shock one day after the death of the NBA legend, with his loss perhaps felt most in Los Angeles.

Throughout Sunday night, thousands of fans flocked to "The House That Kobe Built," as described by many, including Staples Center.

The House That Kobe Built 💛💜 pic.twitter.com/3Nfw4iymYv

The five-time NBA champion was honored outside the home of the Lakers, the team that Bryant was dedicated to and played for his entire 20-year professional basketball career.

"He was the mayor of L.A. to me," fan Rene Sotomayor said. "Like a lot of people are saying, today's the day that part of L.A. died."
EMBED More News Videos

The love continued to pour in Monday at Staples Center for basketball superstar Kobe Bryant and his 13-year-old daughter who were killed in a helicopter crash in Calabasas.

An incredibly powerful scene unfolded Monday as hundreds of fans filed into the L.A. Live Plaza to pay their respects. Some brought flowers, candles and balloons while many were draped in purple and gold.

"He came to the Lakers in '97, Staples Center wasn't here, so he's the heart of L.A.," fan Edgar Carrazco said.

Less than 24 hours after the death of Kobe Bryant and his 13-year-old daughter Gianna, a new mural dedicated to the two popped up in Mid-City.

Fans reflected on the impact the Lakers great had on their childhood.

"Growing up as a kid, I used to be amazed to see him just work, just balling on the court," one fan said. "It's hard for me to talk right now, I'm sorry."

One thing that all Bryant fans can agree on: his "Mamba Mentality."

"I feel like he did great in every game. There was always a special moment. Every game he always brought something to the court," one fan said.

One man remembered Bryant's contributions off the court.

"What wasn't special about Kobe? He just had talents that nobody in the world could think of. Not only basketball, he was more than an athlete. Just an inspiration, especially for the kids like me growing up in Los Angeles," he said.

Fans laid memorabilia, gifts and sometimes tears as they tried to come to grips with the sudden death of a basketball icon whose legacy they promised won't soon be forgotten.

"His thing was never give up, fight, keep going in - no matter if someone is bringing you down, keep going. We gotta take that in perspective of whatever you do, just keep going," one fan said.

Several restrictions were put in place during Sunday night's Grammy Awards at the Staples Center but have since been lifted around the plaza.

The helicopter carrying Bryant, his daughter Gianna and seven others crashed Sunday morning. John Altobelli, an Orange Coast College baseball coach, his wife Kerri and daughter Alyssa were among the victims.

The group was headed to Bryant's Mamba Sports Academy in Thousand Oaks for Gianna's basketball tournament.

At the time of the crash, foggy conditions were considered so dangerous that local police agencies grounded their choppers.

The Los Angeles County Sheriff's Department said it's too soon to know if the weather played a factor in the crash.

The Lakers and Los Angeles Clippers face-off at Staples Center Tuesday night, when tributes are expected to continue.

In the wake of Kobe Bryant's passing, a story of surreal accomplishments and perseverance has surfaced, serving as inspiration to all who idolized him.