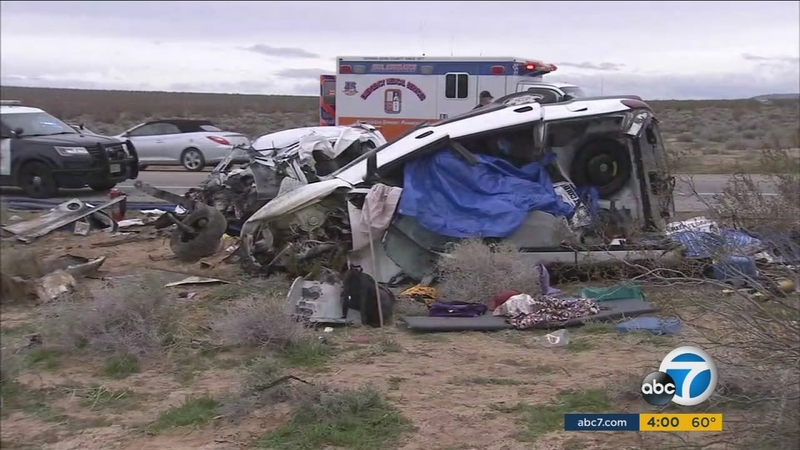 KRAMER JUNCTION, Calif. (KABC) -- One person was killed and at least 27 others were injured following a bus crash in the Kramer Junction area on Monday, San Bernardino County fire officials said.

The wreck occurred near Highways 58 and 395 around noon. California Highway Patrol confirmed the crash involved a small bus and two vehicles.

Authorities said the charter bus was heading east on Highway 58 when it crossed the center divider and hit two cars head-on. The bus rolled over upon impact and the driver in one of the cars was killed.

The occupants in another car had to be extracted from the mangled car by fire officials.

When Eyewitness News asked the driver of the bus what happened to cause the crash - he simply said "traffic."

Seven people were described as requiring immediate care, and 20 others were reported to have less severe injuries, the San Bernardino County Fire Department stated via its official Twitter account.

One of the injured individuals was reported to be a child. A helicopter initially attempted to transport the child to a nearby hospital but could not due to weather. The child was expected to be taken by ground ambulance to Loma Linda University Children's Hospital.

#Update Helicopter out of #FtIrwin unable to medivac child due to weather. He will be taken by ground to @LLUChildrens pic.twitter.com/9DMwoc3wiS

The name of the travel company associated with the bus is U-Best Holiday, based out of Arcadia. The bus belonged to a company called A&F Tours, Inc., which is based out of West Covina. San Bernardino County fire officials described it as a charter bus.

According to background and safety information, as recently as 2016 there were some safety violations involved with A&F Tours.

Fire officials were requesting multiple medical helicopters and nine ground ambulances to respond to the scene, where some patients were believed to have been trapped.

Highway 58 was closed in both directions near Highway 395, though CHP officials were seen letting a few cars through.

In addition to firefighters and CHP officers, animal control officials were also called to the scene.