The proposed rule changes will come back to the board for another review and final vote on March 15.
City News Service 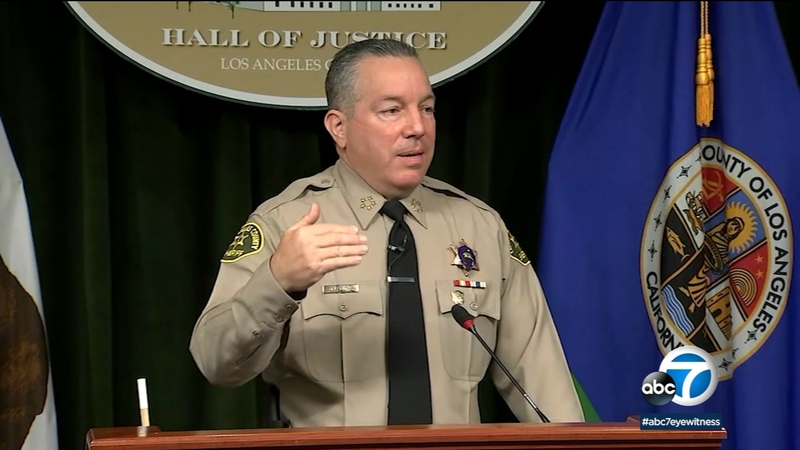 LOS ANGELES (CNS) -- With Sheriff Alex Villanueva declining to enforce the county's COVID-19 vaccine mandate among his deputies, the Board of Supervisors Tuesday gave preliminary approval to a proposal that would give the county personnel director overriding authority to discipline any employees who fail to comply with the requirement.

Villanueva condemned the proposal, calling it a "death blow to public safety'' that would result in the firing of 4,000 members of his department.

But in the sheriff's department, less than 60% of employees were in compliance with the vaccine mandate.

"Unsurprisingly, approximately 74% of the more than 5,000 COVID-19-related workers' compensation claims filed by county employees as of Jan. 29, 2022, have been filed by employees in the sheriff's department,'' according to the motion. "This data illustrates vaccinations' vital role in limiting the spread of COVID-19 and thus, the urgent need to increase vaccination rates across the entire county workforce.''

The motion directs county attorneys to work with the CEO and personnel director to develop proposed amendments to county Civil Service rules, giving the personnel director "overriding authority to discipline the employees of any county department for noncompliance with the county's policy or directives related to the policy.''

Those proposed amendments will be reviewed by the board at its March 15 meeting for final consideration.

The motion was approved on a 4-0 vote, with Supervisor Kathryn Barger abstaining.

The authority to discipline -- or terminate -- employees who violate the mandate currently rests with individual department heads, such as the sheriff.

The motion states that such an arrangement "has allowed for inconsistent application and enforcement of the policy and wide variety from department to department.''

Villanueva, who has encouraged people to consider getting vaccinated, has spoken out against the county's vaccine mandate, saying it would decimate the ranks of what he calls an already depleted department.

He said deputies should have the option of undergoing regular testing rather than being forced to get vaccinated.

The sheriff spoke via telephone at the beginning of the Board of Supervisors' meeting Tuesday, and called the proposed shift in disciplinary authority a "death blow to public safety in Los Angeles County'' that would have little impact.

"... This is ill-advised, illogical and probably in the long run illegal,'' Villanueva said. And by the time we figure out the legality of it, we're going to be past the pandemic, which will make the result irrelevant. I urge you to deescalate, dial back the rhetoric and find some common ground -- testing or vaccination, and we're doing that right now.''

On Monday, an attorney for the Los Angeles County Professional Peace Officers Association sent a letter to the board objecting to the proposal, saying it would violate the county charter and amount to an overstepping of the board's authority.

"Any attempt to take over the sheriff's ability to oversee the disciplinary process for his employees, it is submitted, would certainly not survive legal scrutiny by the courts who would likely find the BOS exceeded their authority under well-established legal principals,'' attorney James Cunningham wrote.

Citing a 1977 court ruling, Cunningham added, "Such supervisory control by the BOS would directly conflict with the admonition that the board has no power to perform county officers' statutory duties for them or direct the manner in which duties are performed.'''

Under questioning by Kuehl, an attorney for the county said flatly Tuesday that the board has full legal authority to shift disciplinary authority for the vaccine mandate to the personnel director.

Kuehl said employees' refusal to get vaccinated or at least request an exemption "really puts county lives at risk, and it is simply unacceptable.''

"To protect county lives ... we have to enforce this mandate,'' she said. "Every department head must be serious about enforcing departmental and countywide policies. ... Not all of our department heads have recognized that this policy is critically necessary and will save lives. ... We are not going to permit county lives to be jeopardized by an individual decision not to comply with county policy. If you, county department head, will not take this seriously ... the county director of personnel is willing to do so.''

Barger abstained from the vote, saying she didn't support changing policy in response to the actions of a single person -- Villanueva.

"To change now over one individual or one manager, I don't feel is appropriate,'' she said.

She suggested that county administrators need to do more to work with the sheriff's department and labor union leaders to reach a solution that will not result in the mass firing of essential workers.

Supervisor Janice Hahn said she hopes the proposed change in policy would motivate more people to adhere to the mandate, saying she hopes "once they understand what the end game is, they will take the opportunity to get vaccinated.''

Hahn also said the county should consider lifting a hiring freeze on the sheriff's department and increasing recruit academies to ensure the agency can maintain public safety if large numbers of deputies are terminated as a result of the vaccine mandate.