At one point, some demonstrators were seen blocking emergency entrances to the hospital where the two deputies are being treated. Shortly after, a local radio reporter was arrested during a scuffle with deputies.
KABC 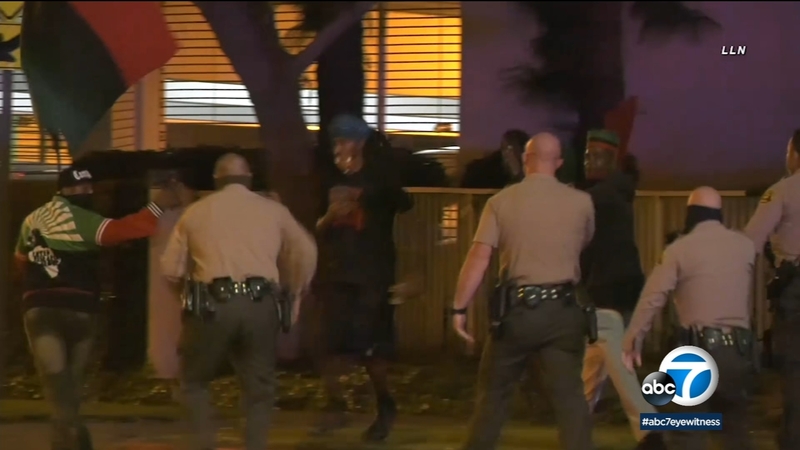 LYNWOOD, Calif. (KABC) -- A small crowd of demonstrators gathered outside a Lynwood hospital Saturday night where two Los Angeles County Sheriff's deputies are being treated after an ambush shooting in Compton.

Video from outside St. Francis Medical Center shows authorities trying to clear the area. At one point, a few people were seen blocking the emergency exit and entrance to the hospital.

One witness said some of the demonstrators even tried to get inside the building.

"They were saying death to the police, kill the police and they were using all types of curse words and derogatory terms about the police, just provoking our police officers," said Bishop Juan Carlos Mendez with Churches in Action. "(It's) unacceptable behavior because the hospital should be a sanctuary, we should leave hospitals alone."

The sheriff's department tweeted that protesters were yelling "We hope they die."

To the protesters blocking the entrance & exit of the HOSPITAL EMERGENCY ROOM yelling "We hope they die" referring to 2 LA Sheriff's ambushed today in #Compton: DO NOT BLOCK EMERGENCY ENTRIES & EXITS TO THE HOSPITAL. People's lives are at stake when ambulances can't get through.

Shortly afterward, a local radio reporter was also caught up in the chaos and was tackled to the ground and arrested by deputies outside the hospital.

KPCC/LAist reporter Josie Huang had been covering the earlier press conference. The department tweeted that she ignored commands to stay back as deputies tried to arrest someone else and did not identify herself as a member of the press.

(2/3) During his arrest, a struggle ensued at which time a female adult ran towards the deputies, ignored repeated commands to stay back as they struggled with the male and interfered with the arrest…

Huang was arrested for allegedly obstructing justice. Authorities say she didn't have proper credentials on her but KPCC/LAist have refuted that, saying that "she was clearly wearing press credentials around her neck."

Video taken by ABC7 shows at least five deputies pinning her to the ground before placing her in a patrol car.

The news agency reports that Huang was taken to the women's jail at the Century Regional Detention Center and was later released without bail.

Hours after her arrest, Huang tweeted that she was headed home and said she would share more about the incident "after a little rest."

Hi, all. I’m out of county jail and am headed home. Thank you for caring. I have seen @LASDHQ tweets and have thoughts and videos to share soon after a little rest

According to a KPCC newsroom executive, Huang had "visible bruises and scrapes, a sore shoulder and a blackened eye."

Huang posted a series of videos on Twitter recalling the incident, one showing two deputies damaging her phone by kicking and stepping on it.

In a statement, KPCC said the obstruction charge against her should be dropped.