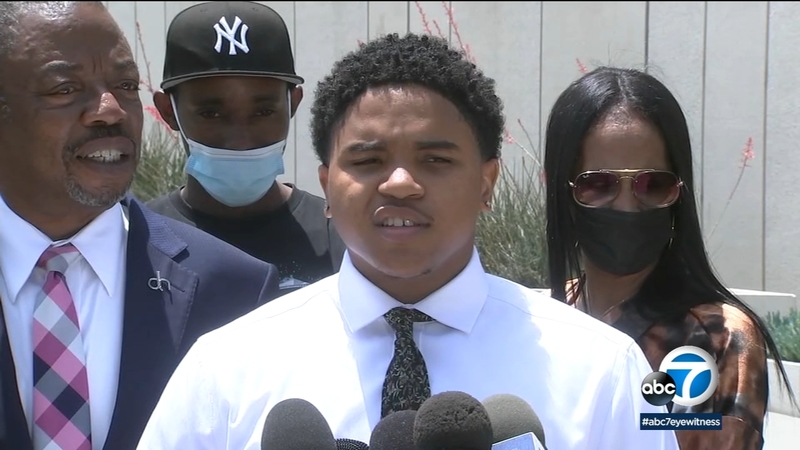 LA man sues LAPD, his own uncle over injuries at BLM Protest

LOS ANGELES (KABC) -- A young filmmaker claims an LAPD officer, who happens to be his own uncle, ordered officers to shoot him with non-lethal projectiles during a Black Lives Matter protest last year.

On May 29, 2020, Jamal Shakir Jr. came down from his Spring Street apartment to join a BLM protest.

His cellphone video shows him confronting his own uncle, Eric Anderson, who was in uniform with other officers, and urging him to join the protest.

During the video, the sound of weapons discharging is heard and the camera image spins and falls to the ground.

Shakir, now 23, says he was hit twice by projectiles, once on his hand and once on his backside.

Shakir has filed a lawsuit against the LAPD and his uncle. The lawsuit calls for his uncle to be fired.

Shakir says: "The irony of this entire story is that I spent my entire life doing everything to prevent being a statistic of the criminal justice system. Or being a victim of the police brutality force just due to the fact of my circumstances of my mother and father being incarcerated at an early age."

Shakir, through his attorney, says he and his uncle are not close. However, he did hire his uncle to work security for a video shoot of his a year before the protests...