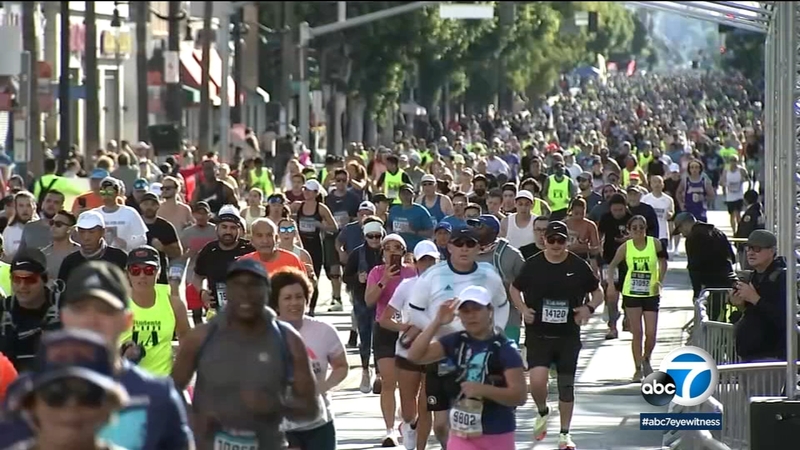 LOS ANGELES (CNS) -- Kenyans John Korir and Delvine Meringor won the 37th edition of the Los Angeles Marathon on Sunday, with Meringor winning an added $10,000 bonus for beating Korir to the finish line.

The women's elite field started approximately 18 minutes before the men's, based on the expected men's and women's winning times, which organizers correctly predicted would put the top female and male runners within seconds of each other heading into the final mile.

The race held the gender challenge from 2004 to 2014, with women winning seven times and men four. It was discontinued in 2015 when the race served as the USA Marathon Championships.

Korir nearly won the 2019 race, but was passed in the final 200 yards by countryman Elisha Barno and finished second. His older brother Wesley Korir also won back-to-back Los Angeles Marathons, in 2009 and 2010.

African women have won nine of the last 12 races, with runners from the former Soviet Union winning twice and Natasha Cockram of Wales winning in 2021. A U.S. runner last won the women's race in 1994.

The second-place women's finisher was Antonina Kwambai of Kenya with a time of 2:30:12.88, with Ethiopian Biruktayit Eshetu Degefa third at 2:31:28.99.

American Tyler McCandless of Colorado was fourth for the men in a time of 2:15:18.02. The top-finishing American woman was Amanda Phillips of Oregon in fifth place with a time of 2:35:06.75.

Just like in November, the race is being run on the "Stadium to the Stars'' course which begins at Dodger Stadium, then heads west to Brentwood, where runners double back on San Vicente, Sepulveda and Santa Monica boulevards, ending at Avenue of the Stars in Century City.

The temperature at Dodger Stadium at the start of the race was in the mid-50s, with partly cloudy skies that cleared up as the race continued, though runners were expected to face headwinds after 10:30 a.m., Dave Bruno, a meteorologist for the National Weather Service, told City News Service.

From Dodger Stadium, runners headed through downtown Los Angeles, Echo Park, Hollywood, West Hollywood, Beverly Hills, Century City, Westwood and Brentwood then back through Westwood to Century City, where temperatures warmed up into the low 70s by noon.

Marathon officials said nine people were evaluated for medical issues as of noon Sunday, including one person who required immediate care. Further details were not immediately available.