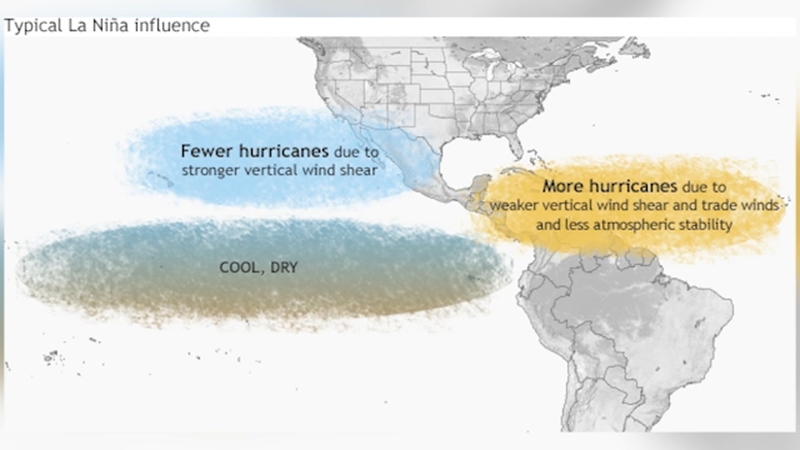 As wildfires rage up and down California, federal weather officials say the possibility of any relief in the form of rain is slight due to a La Nina weather system that has popped up in the Pacific Ocean.

The National Oceanic and Atmospheric Administration announced Thursday that the system, which often means a busier Atlantic hurricane season, a drier Southwest and perhaps a more fire-prone California, has formed.

Meteorologists had been watching La Nina, the cooler flip side of the better known El Nino, brewing for months.

"It doesn't look like we're going to have any precipitation as far as we can look," said Eric Boldt with the National Weather Service.

It's not guaranteed, but typically, La Nina years are drier, which not only means less rain, but a delay in the arrival of the rainy season and therefore a delayed end to the fire season.

"From Central California to Southern California and wanting the fire season to end early, you probably didn't want to roll the dice and get La Niña," UCLA geography professor Glen MacDonald said.

The more land that burns, the more land is exposed to mudslides when the rain finally does come. Combine that with drought conditions in 13 of the last 18 years and an extremely dry winter could prove disastrous for the state which has already seen a lot of it this year.

"So we still have a lot of stressed trees, we have still a lot of groundwater, aquifer water that's depleted, so really we have a long term drought in place," Boldt said.

A natural cooling of certain parts of the equatorial Pacific, La Nina sets in motion a series of changes to the world's weather that can last months, even years. This one so far is fairly weak and is projected to last through at least February but may not be the two-to-three-year type sometimes seen in the past, NOAA Climate Prediction Center Deputy Director Mike Halpert said.

For those looking for a ray of optimism: The last time the region saw a La Nina event was the winter 2016-17, a year in which Los Angeles saw 19 inches of rain, the most in a decade.