La Scala speaks out about 'discreet' New Year's dinner: 'No harm was meant' 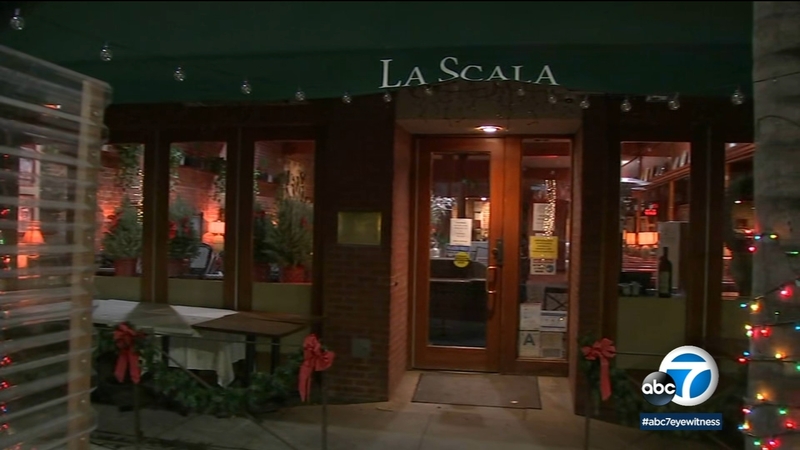 BEVERLY HILLS, Calif. (KABC) -- A Beverly Hills restaurant that was inviting customers to a "discreet" indoor New Year's Eve dinner has issued its first public statement about the controversy, saying the invitations were misinterpreted and "no harm was meant."

La Scala had dropped invitations into takeout bags to what it described as a 1920s Prohibition-era "Speak Easy"-themed dinner to be held indoors New Year's Eve.

"Please keep this discreet, but tell all your friends," the invitation read.

The county is facing a dangerous COVID-19 surge with hospitals being filled to overflow and dozens of deaths recorded every day.

However, the restaurant noted in its first public statement that the original stay-at-home order was set to expire Dec. 28.

In an Instagram post Monday, the restaurant said the invitation meant to convey the message: "With the dining ban set to expire on Dec. 28, we are hopeful of resuming some sort of table service and we are considering taking reservations for New Year's Eve."

But it was widely expected to be extended and Gov. Gavin Newsom on Monday confirmed that extension is likely to be announced Tuesday.

Los Angeles County has followed the state's lead in issuing its own version of the order and on Monday confirmed that the county's own order had been extended.

The stay-at-home orders are triggered when a region's available ICU capacity drops below 15%. Southern California's figure is currently estimated at 0%.

Some hospitals have been diverting ambulances that are transporting patients experiencing a medical emergency. County officials warned Monday that there soon may be no hospitals with room left to take those diverted patients.

In a brief statement to Eyewitness News, the L.A. County Department of Public Health called the planned event a "serious violation" but did not specify if any action would be taken.

The news generated backlash, with the restaurant's Instagram feed being filled with comments describing the party plan as "selfish and destructive" and "disgusting."

Prior to the latest stay-at-home order, restaurants in Los Angeles County were allowed to offer outdoor dining. The restaurant indicated it issued the invitations in the hopes that in-person dining would be allowed to resume for New Year's Eve.

The restaurant wrote in Monday's statement: "Unfortunately the person that wrote it tried to add some levity and said inside instead of outside. It didn't come out as intended, how we wanted to be represented, nor how we wanted to represent ourselves."