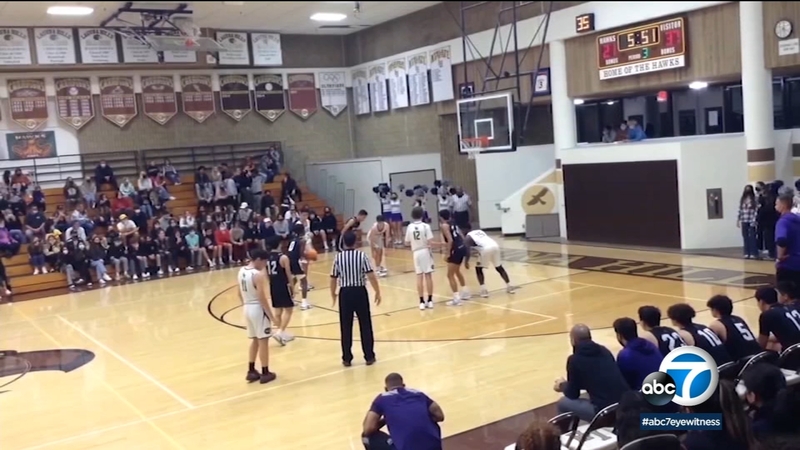 LAGUNA HILLS, Calif. (KABC) -- The principal of Irvine's Portola High School spoke out before a home basketball game on Wednesday, condemning racist remarks that were hurled at one of the school's student-athletes during a previous matchup at Laguna Hills High School.

"Unfortunately, we experienced some egregious, inexcusable behaviors," Principal John Pehrson said, standing on the court with a microphone and addressing the auditorium. "And it's not OK. Those types of remarks are not OK anywhere, and we want to make a statement on that."

The incident occurred last week when a Laguna Hills student who was in the stands at the game began taunting Portola player Makai Brown.

The student was heard in the video shouting, "Who let him out of his cage? He's a monkey!" and "Where is his slave owner? Chain him up! Who let him off the chains?" as Makai was shooting free throws.

"The language and connotations expressed by the words used do not represent the culture, attitudes, or feelings of the students and staff of LHHS, nor those of Saddleback Valley Unified School District," Turner said.
EMBED More News Videos

Makai's mother, Sabrina Brown, said her son discovered the video the next day as he was looking at game footage.

"I'm angry. I'm hurt. I've had emotions that have covered the spectrum," she said.

Terrell Brown said he ended up being kicked out of the gymnasium after having an issue with the Laguna Hills coaching staff.

"A coach from the opposing team, walking on the floor, pointing at my son and cursing? It's never going to be OK with me," Makai's father said.

Sabrina Brown said there is a history of racism at Laguna Hills High School that she's experienced firsthand.

"Last year, a parent from Laguna Hills High School kept referring to my son as 'boy' on the basketball court," she said. "We are from the South, and it is a racial slur for someone to constantly -- and I mean repeatedly, throughout the game -- call my son 'boy.'"

A mother has been charged after allegedly instructing her daughter to hit a fellow basketball player during a youth basketball game in Garden Grove.

In a statement, state Sen. Dave Min of Irvine said: "This incident was by no means unique. Whether it's racist comments at Board of Supervisor meetings or Nazi banners hung from our highway overpasses or a Ku Klux Klan rally, hate is on the rise, and it's unfortunately unfolding in schools across Orange County."

The district said the Laguna Hills student has been identified, counseled and disciplined. Reports that the student himself is a minority have not been confirmed by ABC7.

"Who cares who said it?" Terrell Brown said. "The fact that someone would allow that to happen at that school makes for just a poor administration."

Irvine Mayor Farrah Khan said in a statement: "This is not a one-time incident -- I have received numerous complaints from families and Irvine coaches about Saddleback sports' culture.

"I am asking SVUSD to conduct an investigation into the coach and other staff regarding their involvement in incidents like this and bring forward appropriate actions taken," Khan said.