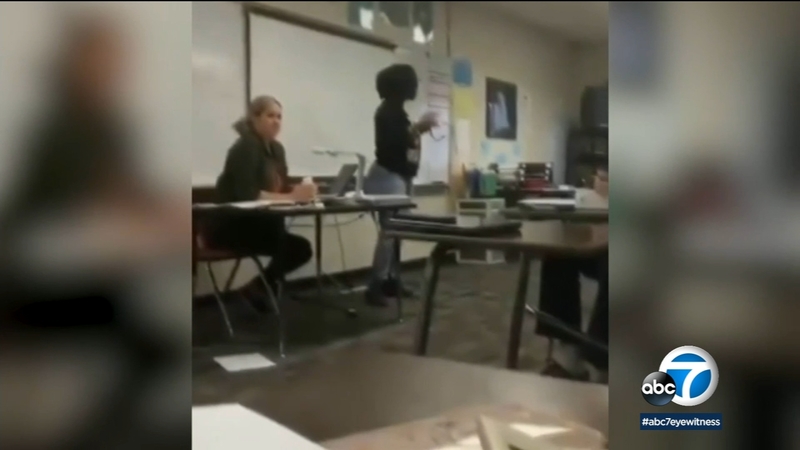 LAGUNA NIGUEL, Calif. (KABC) -- A video from inside an eighth grade classroom at Niguel Hills Middle School was posted on social media and is now part of a school and sheriff's department investigation.

The woman in the video, Christian Tinsley, is demanding to speak to the parents of the students she says are bullying her daughter.

"If you all bully my daughter, if you all look at her the wrong way, if you breathe the wrong way, send your moms to me -- sisters, aunts, anybody over 18, I'll (expletive) them all up," she said in the video.

"I definitely feel for the parents, but I don't believe that she went about it the right way. It threatens the school, it threatened the other kids," said parent Shirley.

The Capistrano Unified School District has banned the woman from coming back to campus this year and says they're looking into the bullying claims.

Tinsley said she had no choice.

"She was sexually harassed at school on Friday. The school took action and they suspended the boy immediately, but because of the suspension, now she's the bad person," Tinsley added.

Tinsley said her daughter's been bullied online and at school since the beginning of the year, and though school administrators have done what they can, she said it hasn't stopped.

"Kids are committing suicide every day because they're getting bullied, I don't want that for my daughter. So what do I do when my daughter says she's afraid to go to school?" Tinsley said.

Tinsley said she still wants to speak to these parents and stop the racist, sexist and derogatory messages she says her daughter continues to receive.

She wants those parents to hear this: "They can really affect other people and make this a hostile learning environment. Everyone deserves to be able to come to school every day and feel safe."

The principal sent a letter to the community saying he was concerned about what happened and that he would visit the classroom on Wednesday.
Report a correction or typo
Related topics:
educationlaguna niguelorange countyviral videobullyingschool
Copyright © 2021 KABC-TV. All Rights Reserved.
TOP STORIES
San Bernardino fire erupts near 215 Fwy, prompting evacuations
Video: Tourist taken to hospital after melee on Hollywood Walk of Fame
Carson: Overturned big rig lands on car, covers it with sawdust
Melvin Van Peebles, godfather of Black cinema, dies at 89
Laura Lasorda talks to ABC7 on Tommy Lasorda Day in Fullerton
Search resumes for Brian Laundrie in Gabby Petito case
Search continues for homeless man who slammed into LA pedestrian
Show More
Hollywood Burbank Airport shut down after person runs onto runway
Heat advisories issued for most of SoCal on first day of fall
Movie and film workers might be headed toward a strike
'No one would be spared': Debt default would set off dire consequences
California struggles to conserve water amid historic drought
More TOP STORIES News