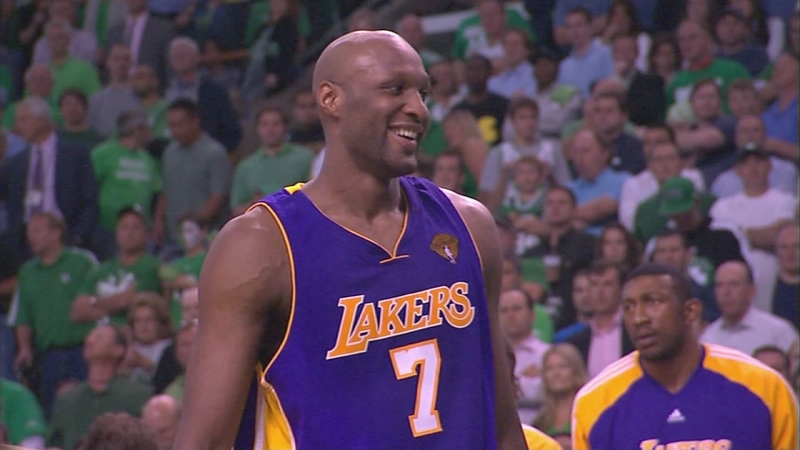 The 35-year-old was found unconscious Tuesday afternoon at the Love Ranch brothel in Crystal, Nevada, about 70 miles from Las Vegas.

Dennis Hof, who owns the Love Ranch brothel and other legal brothels in Nevada, said his staff had picked up Odom from a home in Las Vegas on Saturday. He said Odom had been taking herbal Viagra and had drunk part of a bottle of cognac since arriving.

At Wednesday's press conference, authorities played the 911 call in which employees from the ranch said Odom had been using cocaine, but had not done it since Saturday, and that he had used the sex enhancement tablets over a three-day period.

"He was unconscious, but breathing. He had blood coming from his nose and his mouth along with a white substance," Wehlry said.

Paramedics arrived and were able to stabilize Odom. At 6 feet 10 inches, he was too tall to fit in the helicopter that was available so he was driven to Sunrise Hospital and Medical Center.

"This is just horrific. We're all in shock. Get well Lamar, come back out and let's have some fun," Hof said.

Investigators obtained a blood sample under a search warrant to determine if Odom suffered a drug or alcohol overdose, Wehrly said. If Odom did have drugs in his system, he could face illegal drug possession charges.

Odom is on life support but improving, according to Rev. Jesse Jackson who visited the former NBA and reality TV star at a Las Vegas hospital Wednesday morning.

"Apparently from what the doctor said, he was much better off today than yesterday. He at least has some responsiveness now," Jackson said. "He's got tubes in him now but we felt inspired by his presence."

"We're just holding hands and hoping he can bounce back," Jackson added.

Odom's estranged wife Khloe Kardashian has been by his side, along with her mom Kris Jenner and sister Kim Kardashian.

Hof said a publicist for the Kardashians asked him not to talk to the media.

"They said, 'Please, don't do that. We'd rather have Khloe say what needs to be said,' I told her to go to hell," said Hof.

Odom's personal trainer, Fareed Samad, says Odom had recently been involved in text message arguments with Kardashian and that sent him on a downward spiral.

"He loves that family, he loves her, and they took him in as a family so that really did a lot to him. That kind of took him over the edge so we tried to keep him motivated, but it wasn't physical, it was more mental," Samad said.

"It's tough. It's tough because these guys were real close to him here, and the Laker family really loved him," Lakers guard Nick Young said. "For anybody to be down like that and go through so much, it's tough. Your heart goes out to him."

"Obviously, our hearts and our thoughts and our prayers are with Lamar and his family," Scott said. "I obviously feel for him and hope that he'll be OK."

A visibly distraught Metta World Peace, who grew up with Odom in Brooklyn and played with him on the Lakers, was left speechless upon hearing the news.

"I pray this morning for my brother. Dear God he's one of the good ones. PLEASE watch over him and listen to his heart speak #PrayersForLamar," Wade said.

After seven years with the Lakers, Odom felt crushed in December 2011 when the club traded him. He played his final NBA game 18 months later, and his last years were a spiral of arrest, estrangement and widespread rumors of drug use.

Odom has a daughter, Destiny, and a son Lamar Jr., from a previous relationship.