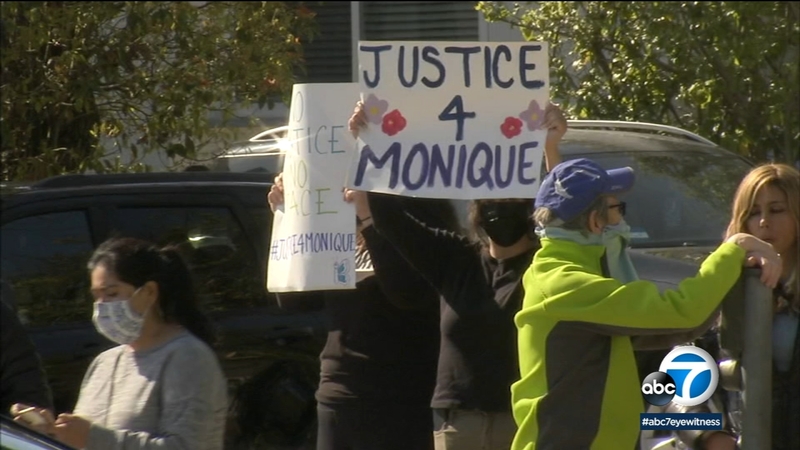 LOS ANGELES (KABC) -- Grieving family and community members rallied once again on Saturday to renew their call for justice in the death of a 32-year-old woman who was killed in a crash involving a Lamborghini driven by a teenager.

On Feb. 17, Monique Munoz was on her way home from work when her Lexus sedan was struck by a Lamborghini SUV at Overland Avenue and Olympic Boulevard in West Los Angeles. Police say the driver was a 17-year-old who smashed into her car at high speed, killing her.

Since then, Munoz's family have called for charges against the teen.

"We have purpose. We have a direction. We have this responsibility to Monique to give her a voice, to speak for her, to give her justice and to just show her that we're here for her," said Stephanie Crespin, the victim's cousin.

Loved ones on Thursday said their final goodbyes to the woman killed in a crash involving a Lamborghini that was being driven by a 17-year-old.

Crespin says she'll be at the scene of the crash every weekend protesting for justice for as long as it takes.

"We know that there's a process and that has to happen and we are letting that happen," she said. "We just want justice, we want there to be appropriate charges that reflect that there was a life that was taken."

On Feb. 23, the teen was booked for vehicular manslaughter and the case was presented to the office of District Attorney George Gascón. The DA's office says the case is being reviewed.

The father of the juvenile suspect last week posted a statement to Instagram apologizing to the Munoz family: