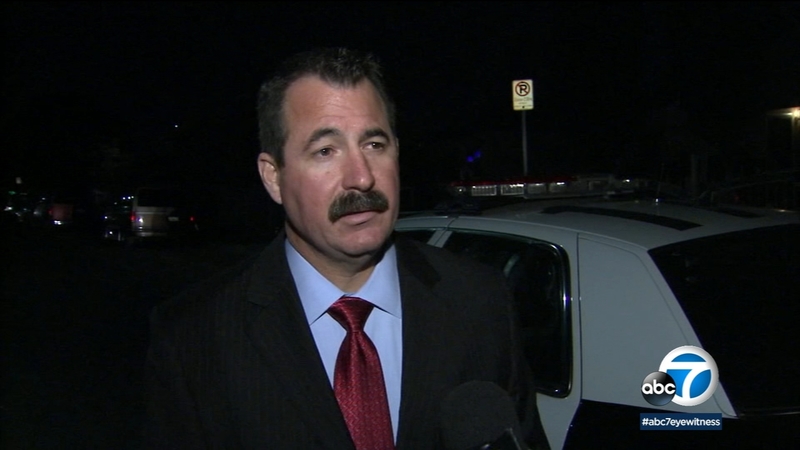 LOS ANGELES (KABC) -- Eyewitness News has learned that a former Los Angeles Police Department commander who was suspected of driving drunk, hit-and-run and leaving the scene of an accident in January was never given a breathalyzer test by LAPD investigators.

Jeff Nolte's city-owned Dodge Charger was found wrecked and abandoned in Carson early on the morning of January 25. Nolte was nowhere to be found.

In an interview, LAPD Chief Michel Moore told Eyewitness News that whether or not Nolte had been drinking the night he crashed is unknowable.

"He was not subjected, or he did not submit to a breathalyzer test," said Moore.

"Taking a breathalyzer test is part of a DUI investigation, from a criminal standpoint, requires certain evidence of objective symptoms of alcohol use, and it's my understanding that, at the point in time in which this investigation was conducted, that such symptoms did not exist," said Moore.

Eyewitness News first obtained 911 calls from the night of the crash in February. Callers reported seeing a vehicle driving down the freeway with sparks flying and missing one tire.

Questions surround a crash in Carson that involved a Los Angeles police commander abandoning his mangled vehicle after people reported him driving erratically on the 405 Freeway.

"And I was trying to honk and get them to pull over and they kept on driving and they just had sparks flying," one caller reported to 911. "They don't have no tire -- I mean, literally no tire!"

Eyewitness News asked Moore if the incident should have been investigated by his detectives as a possible DUI.

"Sure, I understand -- and it's my understanding that we learned about those calls well after this investigation was initiated," said Moore.

"Those are pieces of the puzzle that come together, but to come together after that period, that short window of time in which we have an opportunity through chemical tests and so forth to determine whether or not an individual was in fact driving impaired," Moore said.

Nolte allegedly crashed into a guardrail on the 110 Freeway near the 405 and then continued driving.

Because it was on the freeway, that would be the California Highway Patrol's jurisdiction.

Nolte then allegedly exited the 405 Freeway at Avalon Boulevard and abandoned his wrecked Dodge Charger near a car dealership in Carson, less than a block from the Carson sheriff's station.

The abandoned car would have fallen under the jurisdiction of the Los Angeles County Sheriff's Department.

But the LAPD immediately took over the case, investigating it themselves.

"The public does have an interest in knowing these things, because -- again, these are not private security guards," said Loyola Law School Professor Jessica Levinson. "These are public law enforcement officers. They work for us, they're paid for by our tax dollars and therefore we have some interest in knowing what happens when they may fail to act appropriately."

LAPD Public Information Director Josh Rubenstein told Eyewitness News earlier this week that LAPD investigators submitted a misdemeanor case on Nolte to the City Attorney's Office in Carson -- and that the case was rejected, meaning no criminal charges.

"The case was presented to the city attorney and it was rejected. Therefore the criminal investigation is closed. The administrative investigation is also closed as the employee does not work at the LAPD any longer," Rubenstein told Eyewitness News by email.

Eyewitness News checked with the Carson City Attorney's Office. We were told that their office does not handle misdemeanor cases, only code-enforcement violations. The city does not have the authority to accept, reject or prosecute any criminal cases.

Chen told Eyewitness News she explained all of this to the LAPD detective who had described the case to her as a hit-and-run with a guardrail that involved a city employee driving a city of L.A. vehicle.

Rubenstein says the case they "submitted" to Carson did not include any allegation that Nolte was driving under the influence, just alleged property damage and leaving the scene of an accident.

"It's curious to me, how is it that someone from the LAPD would make such a rookie mistake to think that they would refer this to the city of Carson's attorney," said Carson Mayor Albert Robles.

We asked Rubenstein repeatedly this week -- why would the LAPD submit Nolte's case to an agency that has no ability to review or prosecute cases?

Late Thursday afternoon, Rubenstein told us he'd just been told that the case was also submitted to the L.A. County District Attorney's Office in late July.

Eyewitness News has asked the District Attorney's Office three times in the past week if a case had been submitted to their office on Nolte. As recently as Thursday morning, the answer was no. We asked the office to check again Thursday night, but did not receive any further clarification.

The following Tuesday, the DA's office explained why the case did not show up in their system when we asked about it: "A case was presented on July 25 and entered into the office's case tracking system on Aug. 12."

Moore tells Eyewitness News that while state law prevents him from discussing police personnel issues, he did compel Nolte to provide a statement for their administrative investigation.

"While I'm not at liberty to discuss the details of that administrative investigation, I am at liberty to say that allegations of misconduct did by him, I did sustain and I did take action," said Moore.

Nolte retired in June. He and his attorneys have not responded to repeated requests for comment.