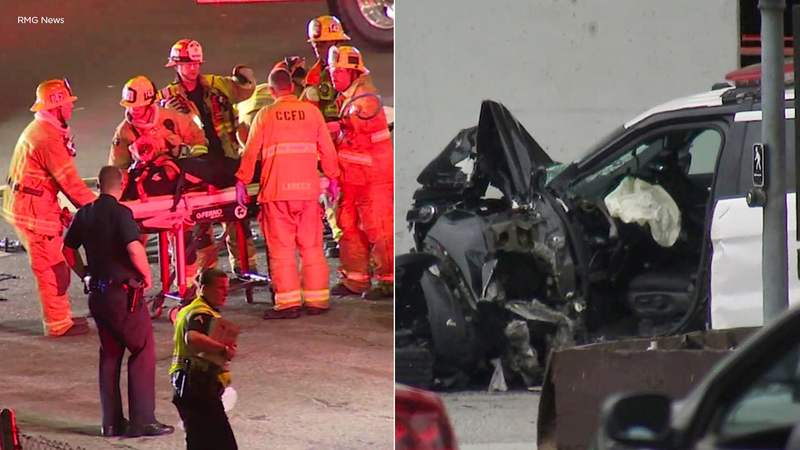 CULVER CITY, Calif. (KABC) -- A Los Angeles Police Department sergeant is expected to be OK after being injured in a hit-and-run involving a domestic violence suspect chasing down a victim in Culver City.

The crash happened in the area of Bristol Parkway and Centinela Avenue at about 1:30 a.m. Tuesday.

Police said it all started in the Inglewood area, when a woman called for help regarding a domestic violence issue with her boyfriend.

The woman fled in her car, and the suspect trailed behind her in his vehicle.

The victim reached the Culver City area and stopped alongside the LAPD sergeant at a red light. She tried to flag her down for help when the suspect rear-ended the sergeant's cruiser, which then collided with a concrete post, authorities said.

The female sergeant sustained broken bones, possibly in the arm and foot, and was in stable condition.

Around 2am #LAPD Pacific Sgt was in her police veh in Culver City when she was struck by another vehicle. Susp of the vehicle fled the scene. The Sgt was transported to local hospital & has what appears to be non-life threatening but serious injuries with several broken bones pic.twitter.com/wVYurUwtMF

The suspect fled the scene and was believed to be in a silver Cadillac Escalade with significant damage. An abandoned SUV matching that description was found in Ladera Heights. California Highway Patrol officials were investigating whether it's the suspect's vehicle.

Paul Rouzan said he had been watching the story unfold on the morning news when around the same time, he looked out his front window and noticed the vehicle outside of his house.

"The second time the story came on, they said silver Escalade, and I thought 'Wait a minute...,' so I went outside and saw all the damage and that's when I called the LAPD," Rouzan said.

Officers were canvassing the Ladera Heights neighborhood, looking for witnesses or surveillance video that may have captured the suspect, who has not been identified.