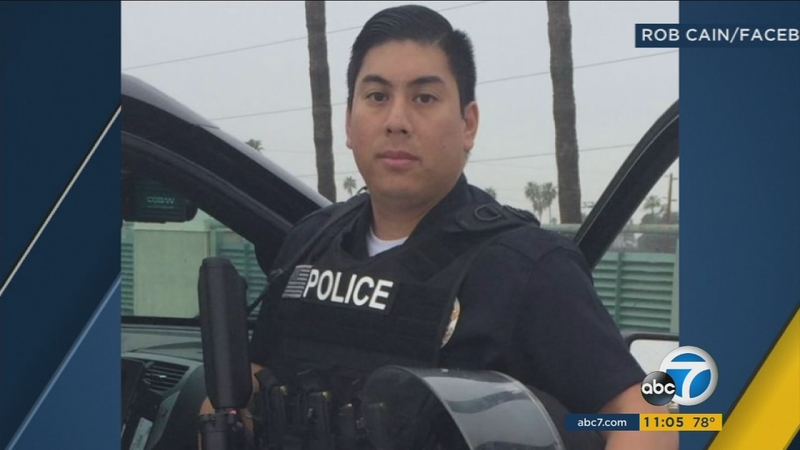 The arrest came amid an investigation into the theft of police cruisers and other equipment by juveniles in the department's cadet program.

Beck announced the arrest of Officer Robert Cain for the alleged statutory rape of a 15-year-old cadet in a press conference Thursday.
Beck said the officer has never been assigned to any of the department's youth programs. He has been with the LAPD for 10 years.

Warrants were served Thursday on the officer's residence in Rancho Cucamonga, as well as his social media accounts and personal communication devices, Beck said.

Neighbors say Cain lives at the Rancho Cucamonga residence with his mother. They moved in about two years ago and he hosted a barbecue for the neighborhood at the time.

Beck says he personally made the arrest of the veteran officer around 2 p.m. Thursday, telling the officer, "You're under arrest for unlawful sex with a minor."

"I find the actions of Cain, if they are proven, to be despicable," Beck said. "I find them to be absolutely inconsistent with the ethics and standards of the Los Angeles Police Department and they are criminal."

Detectives have also searched the 15-year-old cadet's cellphone. They have not seen any pictures indicating a relationship, but Beck said he saw text messages that "were sufficient."

The development comes just days after seven arrests were announced in the alleged theft of police cruisers by teen cadets who police say took the vehicles out for joyrides. The alleged victim was among the group of cadets arrested in connection with the vehicle theft, Beck said.

Beck said Cain was in charge of "the mechanism by which" LAPD equipment was checked out from the department.

The initial investigation was sparked after three teen cadets led officers on two separate chases and crashed two of the stolen vehicles in South LA.

The first vehicle crashed in the area of 77th and San Pedro streets, while a second one ended in a crash at Central Avenue and Adams Boulevard. Authorities found two Tasers and two radios as well as a bulletproof vest that one of the suspects was wearing when he was taken into custody.
After interviewing the suspects, officers realized there was a third patrol vehicle that was missing. It was found near 76th Street and Central Avenue, authorities said.

Investigators also uncovered "a couple of occasions" where the cadets involved were believed to have made traffic stops in stolen cruisers, according to Beck.

Beck said the department is conducting an "absolutely top-to-bottom review of the program" as well as equipment check-out procedures.