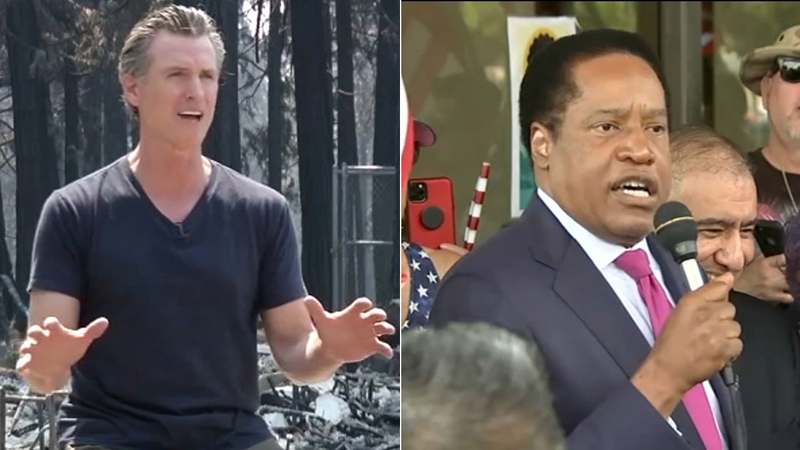 Larry Elder, the leading GOP candidate vying to replace California Gov. Gavin Newsom, said he doesn't think it's necessary for young people to get vaccinated against Covid-19 or for children to wear masks at school, and he vowed to repeal any mask or vaccine mandates for California's state workers if he is elected to replace the Democratic governor in the September 14 special election.

Even though some pediatric ICUs faced a shortage of beds in areas that were hard hit by Covid-19 this summer, he went on to make the misleading assertion that "young people are not likely to contract the coronavirus, and when they do, their symptoms are likely to be mild, and they're not likely to be hospitalized, and certainly not likely to die."

The conservative talk radio host's statements stand in sharp contradiction to the patterns that many doctors and medical officials are warning about as the highly transmissible Delta variant has spread across the country, sickening more young people who are unvaccinated than the earlier phases of the virus last year. At a time when coronavirus infections are surging in children across the United States, the Biden administration has engaged in an intensive campaign to get teens and young adults vaccinated.

It has been a particularly frightening time for parents sending their children back to in-person schooling, because a Covid-19 vaccine is not yet available to children younger than 12. Underscoring that risk, health officials in Houston last week reported a pediatric Covid-19 death of a youth who did not have underlying health conditions. More than 49,000 children have been hospitalized with Covid-19 since August of 2020, according to the US Centers for Disease Control and Prevention.

Though Elder is correct that younger people are less at risk of severe illness and death than older people, that does not mean that the disease has been without dangers for the younger population. Among children who are younger than 18 years old, 496 have died from Covid-19, according to data from the CDC website as of Monday. And 3,031 Covid-19 patients between the ages of 18 and 29 years old have died, according to the agency's data.

Elder insisted that he is "not anti-vax," noting that he has been vaccinated and that he urges others to get the Covid-19 vaccine. But he said as governor he "certainly will not" require California state workers to get vaccinated, or to get tested once a week, or to wear masks at work, as Newsom has mandated.

He rejected the idea that there are increasing numbers of young people who are being hospitalized with Covid-19. That position contradicts the facts. In mid-August, data from the CDC showed that every age group under the age of 50 had surpassed its previous record of hospitalizations, which were recorded in January. And among those groups, the biggest increase in hospitalizations occurred among adults ages 30 to 39 and children under 18.

"I think the science is all over the place about young people," Elder said in the interview. "I would have to dispute your notion that young people are dying."

When it comes to cities, local jurisdictions or private businesses who want to mandate masks or vaccines, Elder said he "won't have very much power" over their policies as governor. When asked whether he approved of the punitive approach taken by other governors who reject mask mandates in schools -- namely GOP Florida Gov. Ron DeSantis who banned mask mandates in schools and then threatened to withhold funding from school districts who defied his order -- Elder said, "I have no plans on doing that, no." The American Academy of Pediatrics has recommended universal masking in schools for everyone over the age of 2, regardless of vaccination status.

The Republican-led effort to force the Democratic governor from office has been driven, in part, by GOP anger at Newsom for his management of the pandemic and what they viewed as overly restrictive rules and regulations to slow the spread of the virus.

Newsom had been in a strong position for most of the summer, but the resurgence of Covid-19 and the wildfires ravaging the state have led to worries among state and national Democrats that there is a very real possibility of him getting recalled and replaced by Elder or one of the more than 40 candidates seeking to replace him.

Vote-by-mail ballots have been sent to all of the state's 22 million registered voters, who will be asked two questions on the ballot. The first is a simple "yes" or "no" question on whether they want to recall the governor, who was elected with more than 60% of the vote in 2018 but is now facing a very tight race on that question. Voters are then asked to choose from the list of potential replacement candidates, including Elder. If Newsom is ousted by a majority on question No. 1, his replacement will be chosen by a simple plurality.

'Not even close to anything on my agenda'

Elder has adopted many staunchly conservative positions on the issues, often influenced by his libertarian approach to some of California's most pressing problems. But he seemed eager to assure Californians that he would not follow through on a few of his most controversial ideas.

The talk radio host and columnist, for example, has argued that the minimum wage should be zero. But he told CNN on Monday that he had no plans to try to make that happen: "Am I opposed to the minimum wage? Yes. ... Am I going to do anything about it? Absolutely not. That's not even close to anything on my agenda list."

Over the years, Elder has also taken some hard-right positions on immigration, including in 2010 when he advocated for amending the Constitution to deny citizenship to the children of undocumented immigrants. "The 14th Amendment was meant only to confer citizenship on newly freed slaves, not on illegal aliens," he wrote in a column.

But when asked whether he would take steps to deny medical care and education to undocumented immigrants in California, Elder replied: "Again, not even close to anything on my agenda." (California's voters attempted to deny immigrants basic government services through a 1994 ballot measure known as Proposition 187, but the policy was struck down by the courts.)

Elder also pushed back on the controversy over his derogatory past comments about women, which were chronicled by CNN's KFile. He argued that he has also highlighted women's intelligence and increasing prominence in the workforce in his writings over the years.

"When I'm on the campaign trail -- and I meet a lot of women -- nobody says to me, 'You know, Larry, I'm concerned about what you're going to do about women.' Just you guys," he said, referring to the media. "It's not an issue. I'm going to be fair to everybody. I've got common sense. I've got good judgment. ... I'm going to be fair to everybody, male and female. They shouldn't have any concern whatsoever," he said when asked what he would tell voters concerned about his past comments.

'Indifferent' to a Trump endorsement

Though Elder supported former President Donald Trump and developed a close relationship over many years with Trump's former senior adviser Stephen Miller, he has berated reporters for focusing on his association with the former President -- who is deeply unpopular with voters in California and was defeated by President Joe Biden in the Golden State 63% to 34%.

He has shrugged off his support for Trump in interviews with CNN and other media outlets -- noting that he hasn't voted for a Democrat since 1976 -- and has seemed to hedge his position on Trump's big lie about election fraud in the 2020 presidential race. When asked whether he wants the former President to endorse him, he replied that he is "indifferent."

"If he would like to give me the endorsement, fine. If he does not want to give me an endorsement, that's fine too. I haven't asked him. I haven't requested it," Elder told CNN. "I've not encouraged anybody from the outside (of California) to endorse me, no matter who he or she is."

In past comments, Elder has appeared to shift his stance on the 2020 election results, telling the Sacramento Bee editorial board that Biden won the election "fairly and squarely," but then complaining that coverage of that remark -- which sparked outrage among some high-profile supporters of Trump on Twitter -- did not include the full context of what he has said about alleged voting irregularities.

There is no evidence of widespread election fraud in the 2020 election.

When asked by CNN whether he believes the 2020 election was "stolen" as Trump has claimed, Elder replied: "Do I believe there were shenanigans? Oh yes."

When pressed on whether he believes Biden was legitimately elected, he sidestepped the question.

"Biden is in the White House," he said.
Report a correction or typo
Related topics:
politicscaliforniagavin newsomcalifornia governor recallelection
TOP STORIES
Search resumes for Brian Laundrie in Gabby Petito case
Heat advisories issued for most of SoCal on first day of fall
California struggles to conserve water amid historic drought
Growing scam targets Bank of America and Zelle customers
Woman safe after video of possible abduction in Bell Gardens
FDA expected to authorize limited wider use of Pfizer booster
Who is running for mayor of LA? Here are the top contenders
Show More
Anti-Black bias events most prevalent in 2020: CA attorney general
Suspects in Kristin Smart disappearance could face trial
Willie Garson, known for 'Sex and the City,' dies at 57
Mega Millions ticket worth $432 million sold in New York
Officials: Many Haitian migrants are being released in US
More TOP STORIES News