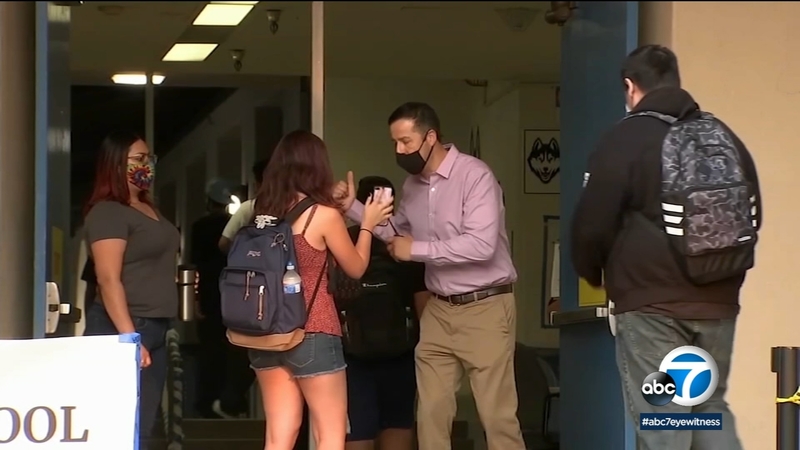 LOS ANGELES (KABC) -- Classrooms in the Los Angeles Unified School District could look much different next month, after tens of thousands of students have reportedly missed the district's COVID vaccine deadline.

When the new semester begins, about 34,000 LAUSD pupils will either be forced to enroll in independent study or will have to leave the district, the Los Angeles Times reported.

According to district officials, there is no longer enough time for students who have not yet received a first dose of vaccine to be fully vaccinated by Jan. 10.

The LAUSD, the second-largest school district in the U.S., has the strictest vaccine mandates in the country.

About 85% of the district's approximately 600,000 students are in compliance with the mandate requiring those 12 and older to get their COVID-19 shots.

That percentage includes students who have received at least one vaccine dose, individuals with a medical exemption or qualify for conditional admission to the district. This last group include homeless or foster youths, students whose families are in the military or certain special education students.

A USC student who traveled to the East Coast for the Thanksgiving holiday was confirmed today as Los Angeles County's second known case of the omicron variant of COVID-19.

The school board voted 7-0 in separate motions on Tuesday to terminate 496 employees, who make up less than 1% of the district's approximately 73,000 workers.

Most of those fired had likely been on leave since mid-October when LAUSD staffers were to have received at least their first vaccine dose, the Los Angeles Daily News reported. Employees were required to receive their second dose by Nov. 15.

Scientists are reporting traces of the COVID-19 variant omicron in sewage from multiple cities across the state of California, including in the Bay Area.

"Parting ways with individuals who choose not to be vaccinated is an extremely difficult, but necessary decision to ensure the safety of all in our school communities," interim Superintendent Megan Reilly said in a statement. "We wish everyone the best in their future endeavors and encourage everyone to get vaccinated."

The district says those employees will have an opportunity for reemployment if they get vaccinated.

In October, the LAUSD said about 97% of its 73,000 employees were at least partially vaccinated or had been granted an exemption, the Daily News reported.