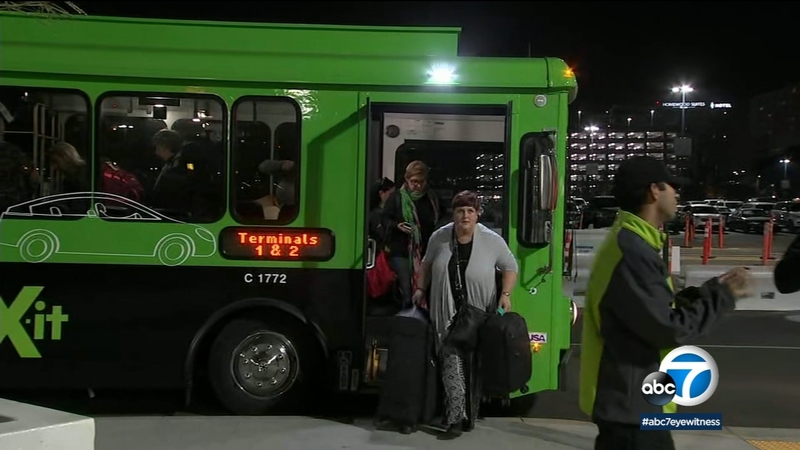 LAX implemented new measures aimed at reducing chaos and long delays after travelers were outraged about getting stuck in a shuttle for nearly an hour on day one of the airport's rideshare ban.

The changes come just days after the airport launched its new "LAX-it" lot Tuesday morning, which is the only place where passengers can now grab a taxi or get picked up by Uber or Lyft.

RELATED: LAX apologizes after livid travelers get stuck for nearly an hour in shuttle on day 1 of ride-share ban

The airport has a fleet of shuttle buses to carry passengers from the terminals to the "LAX-it" lot, which are scheduled to arrive every 3-5 minutes during peak hours. Passengers said the shuttles did come in a timely manner, but once they boarded the shuttles, it was a different story. Some said they were stuck in the shuttle for up to 40 minutes.

Airport officials said that the worst snarls were caused by rideshare drivers who were getting conflicting information about how to enter the LAX-it lot. In the last 24 hours, new signs have gone up with bold letters and directions painted on the pavement. More shuttle buses have also been added to the fleet.

Plus, the rideshare companies are now revising maps for their drivers.

"They are putting a lot of effort into the map device, the online maps they are getting and we are seeing a steady improvement everyday," said Deputy Director of LAX Operations Michael Christensen.

Another change: Traffic lanes on the lower level closest to the terminals are now used only by airport shuttles and "LAX-it" buses, meaning drivers must pick up passengers at the outer median.

Officials said the the changes are fulfilling their intended purpose of reducing the number of vehicles in the airport's central traffic area where construction projects are underway. LAX reports traffic speeds improved by 35% after the new changes were implemented.

Airport officials also reported that the average shuttle wait time at terminals Thursday was two minutes, and the average time to the "LAX-it" lot on a the shuttle was 11 minutes.
Airport visitor Zach Winick says he has come to airport several times in the last few days and he has noticed the difference.