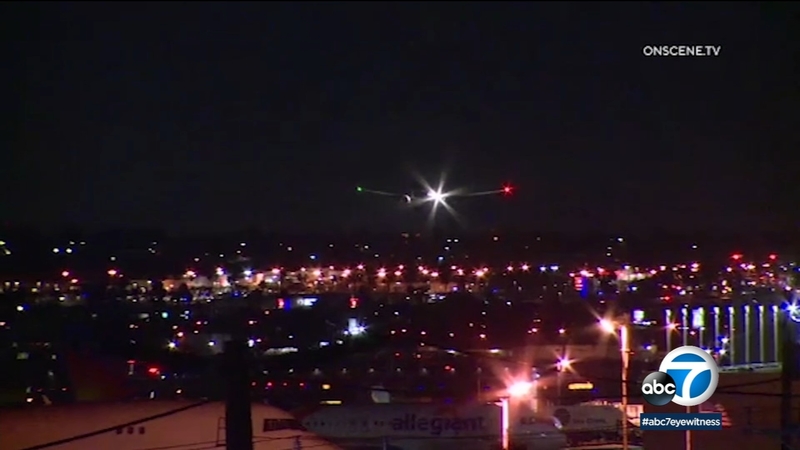 LOS ANGELES (KABC) -- Several questions arose Friday surrounding a medical emergency on a United Airlines flight to Los Angeles International Airport after a man died following a heart attack -- including whether COVID-19 may have played a role.

United Flight 591 from Orlando, Florida, landed at LAX on Monday -- hours after the plane made an emergency landing in New Orleans.

The airline said in a written statement, at the time of the incident, it was determined the passenger "suffered a cardiac arrest, so passengers were given the option to take a later flight or continue on with their travel plans."

Mayor Eric Garcetti said hospital officials are telling him and his staff that if Los Angeles continues on its upward trend of COVID-19 hospitalizations through Christmas, the medical facilities will "go under."

United says all passengers decided to stay on the plane.

There are reports the man's family told medical workers he had coronavirus-related symptoms, including loss of taste and smell.

One person who says she was on the flight tweeted at United.

@united can I ask how you guys let a covid positive man on my flight last night? He was shaking and sweating boarding the plane. He was clearly sick and then died mid flight. We had an emergency landing in New Orleans and we didn't even switch planes afterwards. We all sat

She claimed the airline staff "cleaned up his blood and germs with wet wipes."

The wife of the man told everyone on board and the staff and nurse that he was covid positive. I was 3 rows away. I heard what was said. The wife stated he was symptomatic for over a week. The nurse and emt that worked on him told everyone near him to get tested

Passenger Megan Hubbard said the man was shaking and having a hard time breathing.

Hubbard said she and Cameron Roberts were just three rows away and heard the wife talking to EMTs.

"She immediately said he had tested positive like a week ago for COVID and that he was having symptoms, having trouble breathing," Hubbard said.

United says the Centers for Disease Control and Prevention has contacted the airline.

"We are sharing requested information with the agency so they can work with local health officials to conduct outreach to any customer the CDC believes may be at risk for possible exposure or infection," United said in a statement. "The health and safety of our employees and customers is our highest priority, which is why we have various policies and procedures in place such as mask mandates and requiring customers to complete a 'Ready-to-Fly' checklist before the flight acknowledging they have not been diagnosed with COVID-19 in the last 14 days and do not have COVID-related symptoms."

Hubbard and Roberts said they were not given the option to leave the plane.

"It was more like, if everybody's comfortable, we're going to head on and continue once we get everything refilled," Roberts filled.

Hubbard and Roberts say they have been tested and are in quarantine, but no one from either United or the CDC has contacted them so far.

An infectious disease expert explained the risks with flying during the pandemic.