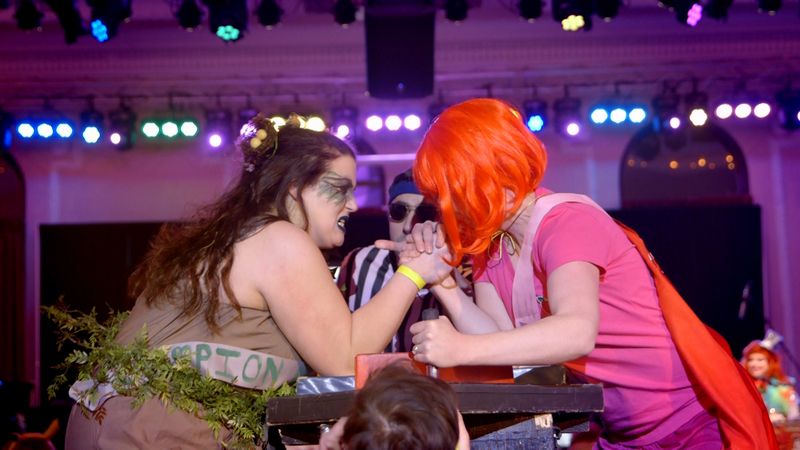 CHICAGO -- "I'm the 'Mistress of the Muck,' the 'Diva of the Deep,' with a mouth that'll make a sailor blush," said five-time champion arm wrestler, Cursula.

The tentacle-costumed performer is one of many colorful characters who participates in The Chicago Lady League of Arm Wrestlers, a unique tournament event for female-identifying persons. Proceeds raised benefit local non-profit organizations as well as CLLAW's host, The Sideshow Theater in the city's Logan Square neighborhood.

"We are the second league of lady arm wrestling that started in the country," said Katy Collins, co-coordinator for CLLAW. "We are really focused on being inclusive, welcoming everybody, and providing a safe space."

Kapitan Pilipinas, aka Captain Philippines, has been wrestling with CLLAW since 2010. The red, white, and blue performer brandishes a shield and uses the pronouns they/them.

"We have trans-fem wrestlers now and a lot of folks are non-binary. We like to go by 'CLLAW' since we're kind of moving away from just being 'ladies' if you will," said Pilipinas.

The tournament is a best two out of three matches for each performer. For information on the next event, visit cllaw.org