'Out of a 007 movie': Police pull over Mercedes equipped with license-plate flipper in OC burglaries 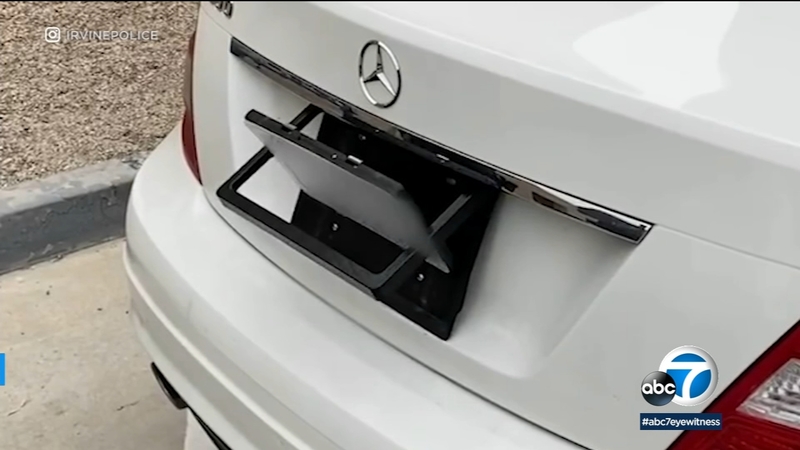 'Out of a 007 movie': Police pull over Mercedes equipped with license-plate flipper in OC burglaries

IRVINE, Calif. (KABC) -- Irvine police located and pulled over a Mercedes-Benz sedan that was possibly involved in a series of vehicle burglaries -- and unexpectedly discovered a spy-type device that flipped the license plate.

A man and a woman were arrested in the case, suspected of using the car that authorities described as "something out of a 007 movie."

The Irvine Police Department on Wednesday released a video clip that shows how the license-plate flipper on the white 2003 Mercedes C300 operates -- at the push of a button.

According to a statement, police were investigating multiple cases in which a vehicle without a license plate was driven into parking structures to commit crimes. Before the Mercedes was found, it was unclear whether the plate was missing or concealed.

About $19,000 worth of watches was stolen during an overnight robbery in West Hollywood, authorities said.

On Tuesday, an Irvine resident spotted the suspicious vehicle and contacted police. Along with the license-plate gadgetry, officers discovered "an elaborate gas-siphoning device that transferred fuel directly into the vehicle's gas tank," a news release said.

The Mercedes also contained burglary tools, evidence of identity theft, and stolen property, police said. During the investigation, detectives recovered a car that had been stolen from Irvine.

Yasmine Kambour, 37, and Chris Huynh, 44, both of Garden Grove, were arrested and booked on suspicion of vehicle burglary, vehicle theft, identity theft, possession of stolen property, and possession of burglary tools, authorities said.