An increasing number of tents around Los Angeles is showing how the homelessness crisis has grown worse during the coronavirus pandemic.
KABC
By Rob Hayes 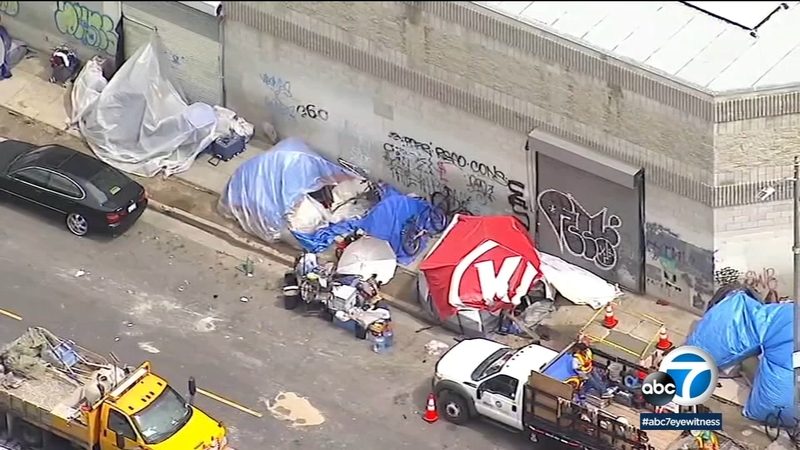 GRANADA HILLS, LOS ANGELES (KABC) -- If you want to get to Petit Park in Granada Hills you'll most likely have to go past a growing homeless encampment that has taken over the sidewalks around the park and the library there.

Neighbors say the strip of tents and tarps across from their homes is littered with drugs and alcohol.

"I know these people have no place to live, but the trash and they use drugs," said Rocio Romero who lives across the street from the encampment. "There's a lady there, every time she fights with her boyfriend she's naked."

Romero says she's called the police several times to report fights and nudity, but no one ever shows up.

Granada Hills isn't LA's only homeless hotspot. The building that used to house Ernie Jr.'s restaurant in Eagle Rock is now fronted by a long line of tents and trash. Neighbors here complain that the homeless have tapped into the building's water and electricity.

Ahmad Chapman of the Los Angeles Homeless Services Authority says on any given night there are more than 66,000 homeless people on the streets of LA County. That number is up 13% from last year.

The pandemic, Chapman says, will most likely make things even worse.

"We can very well see an increase in evictions and more people on the street," he told Eyewitness News.

Meantime, a Columbia University study finds jumps in the unemployment rate due to COVID-19 could increase homelessness in California by 20%. That would push the state's homeless population from 150,000 to more than 180,000.

An ABC7 analysis of Los Angeles data using the same model finds homelessness here could increase by 16% due to the pandemic.

"It was already hard and if you have lost your job or have been suspended recently because of the virus, it's only gotten harder," says Chapman.

He says that is why LAHSA is pushing for its new COVID-19 Recovery Plan. It would rapidly house 15,000 people, then work on finding them long-term housing and treatment. But Chapman says the agency has not been able to find funding for the plan's $600 million price tag.

Some people who live near growing encampments now compare the homelessness problem to the coronavirus outbreak.