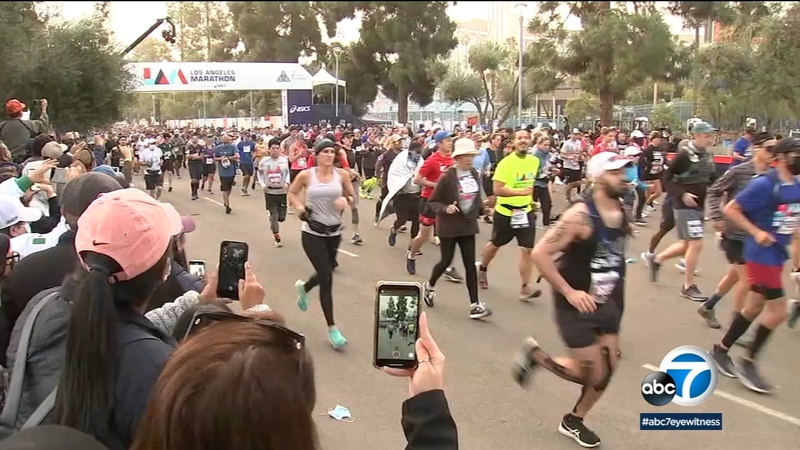 LOS ANGELES (CNS) -- Kenyan John Korir was the men's winner of Sunday's 36th annual Los Angeles Marathon, two years after being passed in the final 200 yards, while Natasha Cockram of Wales was the women's winner.

Korir finished second in the 2019 race, 6.75 seconds behind fellow Kenyan Elisha Barno. Korir is a younger brother of Wesley Korir, the 2009 and 2010 Los Angeles Marathon winner.

Cockram is the third non-African woman to win in the past 12 races, joining runners from the former Soviet Union who won twice. A U.S. runner last won the women's race in 1994.

As of 4 p.m., the L.A. Marathon Unified Command reported that seven patients were treated and three people were taken to a hospital with non-life-threatening injuries. The other four had minor injuries and were treated at the scene. An estimated 97.7% of the runners had completed the race by 4 p.m.

A field estimated by organizers at more than 13,000 runners, from 50 nations, all 50 states and 127 runners who have run all 35 previous editions of the race, left from Dodger Stadium, then ran through downtown Los Angeles, Echo Park, Hollywood, West Hollywood, Beverly Hills, Century City, Westwood and Brentwood then back through Westwood to Century City.

The race was run under near-ideal conditions, with an overcast sky and temperatures in the 60s.

The "Stadium to the Stars" course was used for the first time, with Brentwood its westernmost point, with runners then doubling back on San Vicente, Sepulveda and Santa Monica boulevards, ending at Avenue of the Stars in Century City.

The race was run on the "Stadium to the Sea" course from Dodger Stadium to near the Santa Monica Pier from 2010-2020.

The change was made because the dramatically increased costs quoted by the city of Santa Monica for the 2021 running of the marathon, and future events, made remaining in Santa Monica financially infeasible,'' the McCourt Foundation, which conducts the race, said in July 2020 when it announced the switch.

The race was run with its smallest field since its inaugural edition in 1986 and eight months later than usual.

"Our operations team has always been planning for a reduced field size in order to safely host the marathon and provide for adequate social distancing at the start line and on the course," Dan Cruz, the marathon's head of communications, told City News Service.

One factor in the drop was far fewer runners from the Students Run LA free marathon training program for at-risk middle school and high school students. There are usually several thousand runners from the program in the race.

There were 70 graduates of the program in Sunday's race, with City Councilman Joe Buscaino, a candidate for mayor of Los Angeles, running with them.

Despite the drop, the Los Angeles Marathon again had the fourth- largest field among U.S. marathons, a distinction it held each year from 2016- 19. It had the world's largest field in 2020, when the New York, Chicago, Boston and Berlin marathons were all canceled because of the coronavirus pandemic.

The New York Marathon was also run Sunday, its traditional date. The Orange County Marathon was run as a half-marathon Sunday. It is customarily held in May.

The McCourt Foundation announced last November that the 2021 Los Angeles Marathon would be held May 23 because of the coronavirus pandemic. It announced in March that the race would be held Nov. 7.

This was the first time that the race was run in the fall. It has been held in March since its inaugural edition in 1986, except for 2009 and 2016.

The race was shifted to May 25 in 2009, Memorial Day, after its rights were bought in 2008 by a group controlled by McCourt. The City Council stipulated that the race be shifted to a Monday holiday to limit the impact on Sunday morning church services.

The Memorial Day date drew criticism from runners because of the likelihood of warmer weather. And then-City Councilwoman Janice Hahn called holding the race on Memorial Day really kind of an insult and disrespect to our veterans and those who have served this country.''

The marathon returned to March the following year.

The race was run on Feb. 14 in 2016 so it could coincide with the U.S. Olympic Team Marathon Trials held a day earlier.

Proof of full vaccination against COVID-19 or a proof of a negative COVID-19 test was required prior to entry for all participants, staff, volunteers, media and spectators entering the secured start line area at Dodger Stadium.

Face coverings were required while inside the Dodger Stadium start line secured area, except when actively eating or drinking. Runners were allowed to remove their face coverings after crossing the start line.

Organizers recommended spectators along the course wear face coverings along with everyone attending the finish line festival.