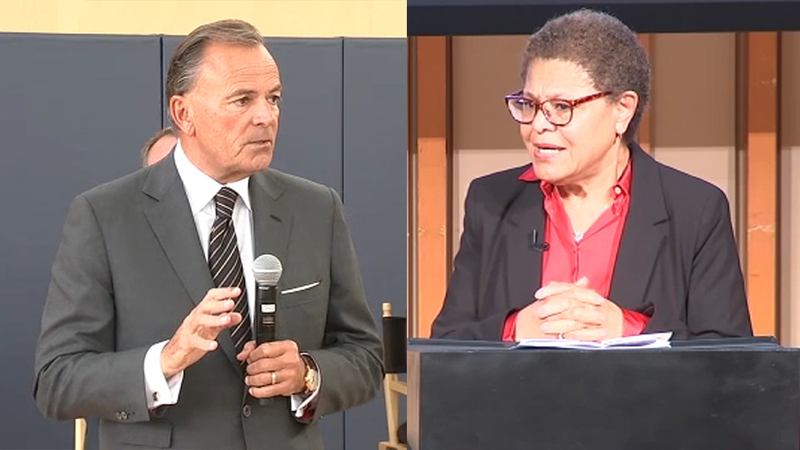 LOS ANGELES (KABC) -- In less than three weeks, every registered voter in the city of Los Angeles will receive their vote-by-mail ballot for the June primary in the mayor's race.

At this point, recent polls show it's a two-person race between Congresswoman Karen Bass and developer Rick Caruso, who both campaigned in L.A. Wednesday on homelessness and crime.

Bass believes her connections to the federal government, not city hall, will help address the homeless crisis.

"I do have close relationships with the administration, and I can pick up the phone and call the cabinet secretary," said Bass. "That is what, I think, needs to be fundamentally different. We can't deal with this problem in a piece meal fashion."

Caruso, who's poured millions of his own money into his campaign, said if you like the way things are going in the city of L.A., don't vote for him.

"If you walk through Skid Row, it's hard to describe the lack of humanity, and it's hard for me to get my head around how within 10 minutes of city hall, a bunch of leaders have said this OK," said Caruso.

"There is a convergence of the rising crime that's going on in this city, and the rising homelessness, and in spite of the city spending a billion dollars a year on homelessness, it just keeps getting worse," said Caruso.

However, Bass said the city will never solve homelessness if it continues to criminalize it.

"A lot of people view the unhoused population as a monolith. Basically, a group of people that are strung out on drugs that don't want to be housed," she said. "You guys know more than anybody that there's different categories of people who are unhoused for different reasons, so you can get mad and say, 'Let's just arrest them. Let's just have sweeps,' but you know, even if you've lost your empathy, even if you don't care, it's not going to work. You arrest somebody, they're going to be arrested for three days, and they're going to be back out either on your street or some other street."

The next time the two candidates will be on stage together will be on May 1 for a mayoral debate at the Pat Brown Institute Public Affairs at Cal State University.