"I know I can get that built," said the L.A. mayoral candidate. "There's surplus land in the city to do it."
KABC
By Josh Haskell 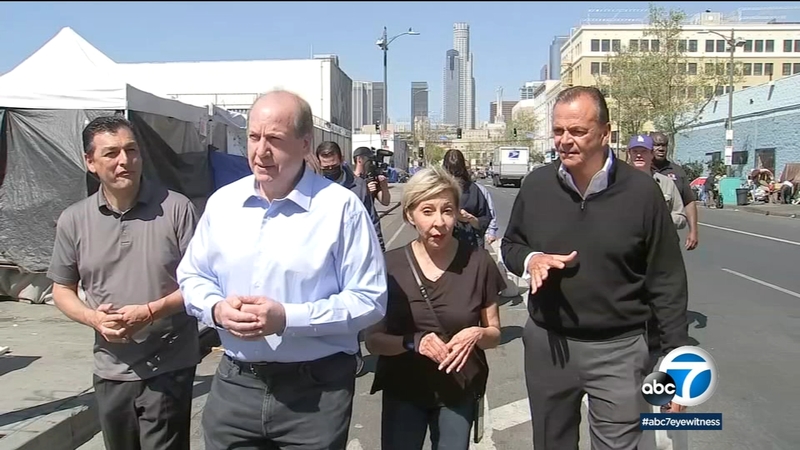 Rick Caruso on Skid Row: 30K housing units or 'kick him out of office'

LOS ANGELES (KABC) -- Developer Rick Caruso, known for building and managing The Grove, The Americana at Brand, and Palisades Village, said he's grateful for his successes and now wants to give back by serving as mayor of Los Angeles and solving the most critical issue facing the city: homelessness.

"If anybody knows how to build, I know how to build, and I will get them built in the first year or throw me out of office," said Caruso.

"It's a sea of inhumanity, and it's cruel and we can't allow people to live like this and then we have the amount of drugs that are on the street," he said. "The amount of waste on the street, the smell in the area, but you've got operating businesses that are trying to survive and you've got employees coming to work. This is a crime what's happening and our leaders need to be held accountable for this."

Caruso's background isn't in building homeless shelters and permanent supportive housing, but the 63-year-old believes if you incentivize the private industry to do public partnerships with the city, you can clean up a place like Skid Row faster and cheaper than ever before.

"You have to do temporary housing, which my plan has 30,000 beds within a year," he said. "I know I can get that built. I've talked to the manufacturers. There's surplus land in the city to do it. The minute we have a good clean, warm bed and food, then people need to move off the streets. No more encampments. You have to enforce the law. So, you're going to offer the bed once. You're going to offer the bed, maybe twice. The third time, you're going to say, 'I'm sorry, you've now broken the law,'"

However, Caruso insists the answer isn't jail, although that seems unavoidable for some under his proposal, even though jail has been proven to continue the cycle of homelessness rather than treat it.

"You're going to put them in a facility that will give them the treatment for the mental illness or the drug rehabilitation," said Caruso. "You have to align the root cause and the problem with the solution and you can't treat everyone the same."

Caruso said up to this point, he's worked on the cause and treatment of homelessness through private philanthropy, which includes funding and volunteering at Skid Row's Para Los Niños for over 20 years.

The school, which is surrounded by encampments, offers educational and supportive services to children from low income families while their parents are at work.

Caruso has asked the Skid Row business owners why they believe the city hasn't done more to move those living there off the streets.

"Nobody wants to appear they're trying to kick people off the streets and appear to be heartless," said Mark Shinbane, the owner of Skid Row business Fisherman's Outlet. "The reality is you're being heartless when you allow people to live in these types of situations."

Caruso responded, saying, "Of course you are. It's inhumane. It's cruel."