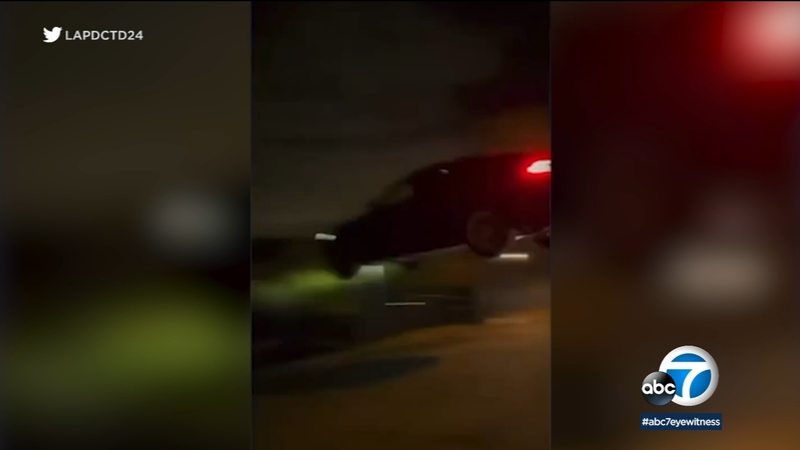 ECHO PARK, LOS ANGELES (KABC) -- Dramatic video shows a driver trying to pull off a dangerously high-speed stunt in a Tesla but ending up crashing in an Echo Park neighborhood.

In the viral video, the Tesla blows through an intersection, going airborne, then slamming into two parked vehicles and several trash cans.

"When I got out here everybody had left and there was just an abandoned Tesla still turned on smashed into the back of my car," explained Jordan Hook. "Neighbors immediately started showing me videos of several Teslas that came down the hill following the one that jumped and crashed and they piled out of that crash."

The incident happened shortly after midnight Sunday, according to the Los Angeles Police Department

"Opened up the door to look outside and there was a headlight right next to my front door," said Echo Park resident Jonathan Sutak. "And then I went out to the road there was broken up garbage pails strewn everywhere"

The rented 2018 Tesla was abandoned at the scene. There is currently no description of the driver.

According to witnesses, passengers in the wrecked Tesla got out, and jumped into another car with men who had been recording the stunt, and left.

LAPD says the driver, who remains on the loose, will face hit-and-run charges.

There is a $1,000 reward to anyone who provides information leading to "the offender's identification, apprehension, and conviction or resolution through a civil compromise," LAPD said.

This stretch of Baxter Street is very steep, and residents say they've seen other drivers and skateboarders perform risky stunts. They told Eyewitness News that Sunday's stunt could have caused serious injuries.

"It was super dangerous for them and for us," Sutak said. "The car could have easily slid into our property."