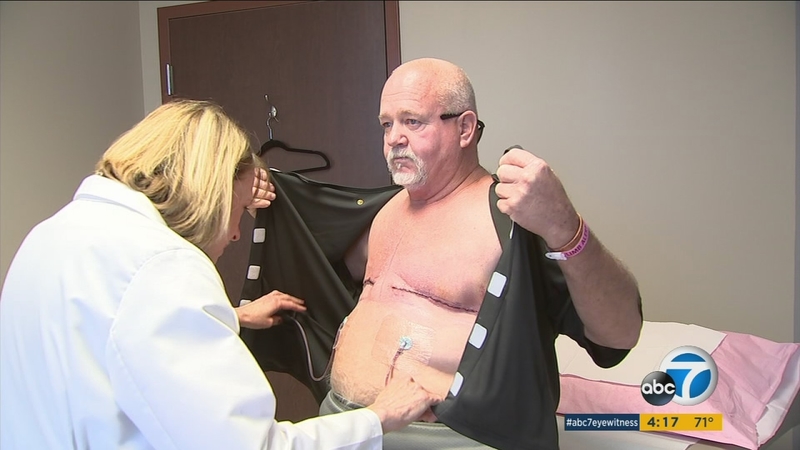 ORANGE, Calif. (KABC) -- It's often viewed as a woman's disease, but the American Cancer Society says about 2,500 men are diagnosed with breast cancer each year and about 500 die.

One Santa Ana construction worker wants men to wake up to the fact that they can get breast cancer too. After his doctor delivered some good news, Tim Manshack hugged his wife as he took another step in his fight against breast cancer.

"To be honest with you, I just never thought, I was never aware that it could happen to a man," Manshack said.

"There seems to be some inter-relationship with estrogen. The estrogen in male fat is just like what there is in female fat stores," she explained.

But six months ago when he noticed an inverted nipple, he tried to ignore it.

"There was some discomfort and so on, but I'm a man," Manshack said.

Carpenter described on a diagram how like in most men, Manshack's tumor was right behind the nipple.

"It was was pulling in on the ducts and his nipple was going in," Carpenter described. "When he stood and looked at himself, one side was in and one side was normal."

Experts say men and women are basically the same when it comes to breast cancer symptoms and treatment, but men don't do mammograms or self-exams and they take a lot longer getting to the doctor.

Carpenter's advice was to consult a doctor if you notice a lump or a change in one breast.

Manshack discovered he carried the BRCA2 gene mutation increasing his risk for recurrence and other cancers.

He opted for a double mastectomy.

"Ten years from now, I don't want to find out that yes it could come back, and I had a chance to head it off at the time," Manshack said.

Through the Male Breast Cancer Coalition, Manshack found a supportive brotherhood of fellow patients. He feels it's his mission to spread awareness.

"I realized it became a responsibility that was bestowed on me," Manshack said.